What is “Text Banking”? My first text banking experience and how you can get involved! 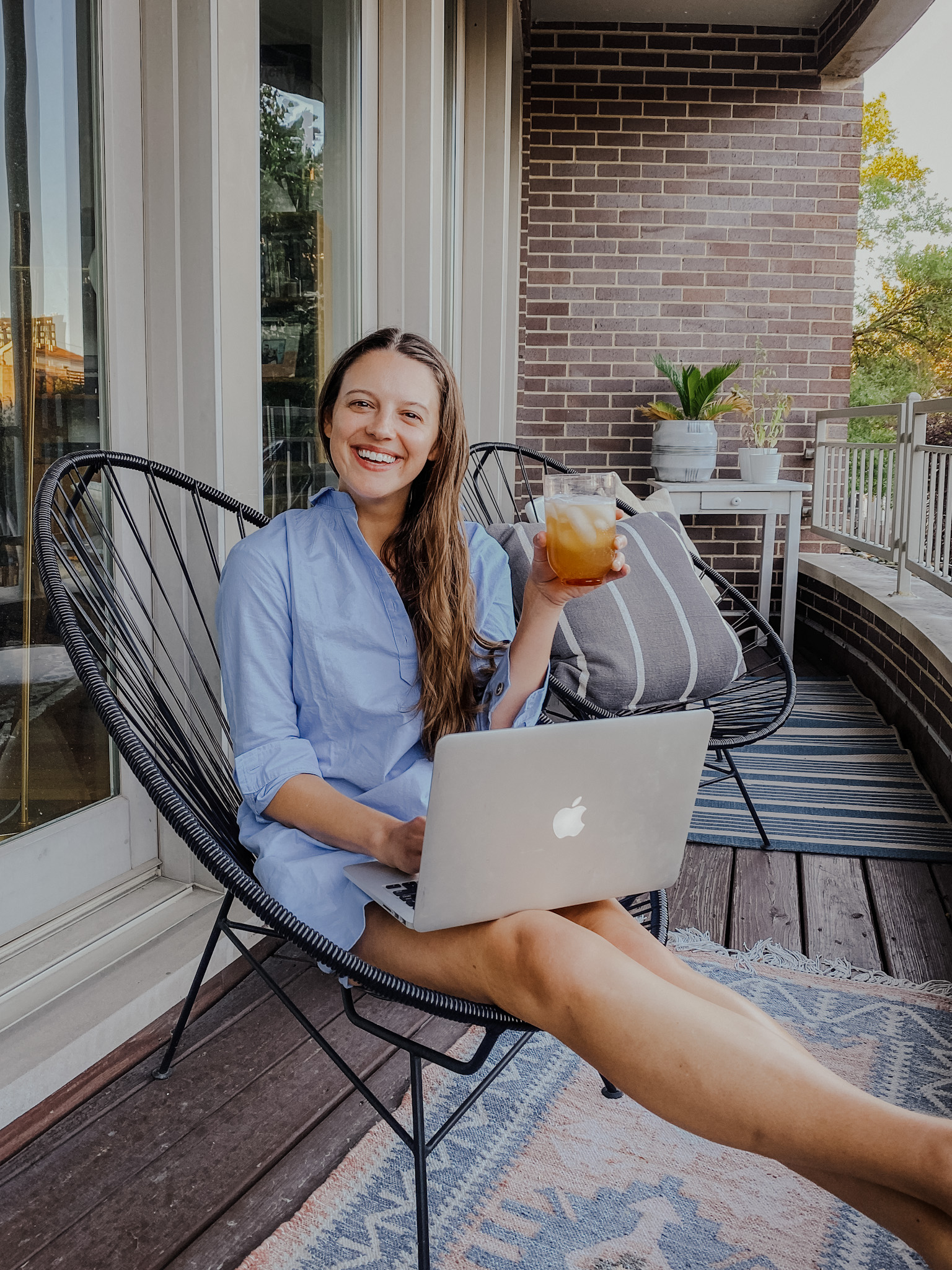 I will admit, I’ve never officially volunteered my time for any political party (or even gone to a political “event’ for that matter). Volunteering money? Of course! I’ve been donating to my favorite candidates regularly since the primaries began. But time? That felt a lot more daunting.

I’ll be honest here. The 2016 election was the first election I ever voted in. It was the first time I ever really paid attention or felt pulled to act. I was raised by Republican parents who didn’t talk about politics a ton. So it wasn’t exactly a part of my life until adulthood. I remember watching the energy of the 2008 election swirling around me in college, intrigued but at the same time, being a little confused by so many young people CARING so much about politics. It was cool to watch, but still felt foreign to me–I remember saying, “I’m not informed enough to vote and I don’t have the time to do the research”. And being too lazy to stand in line to cast my first ballot. I barely batted an eye as Obama came up for re-election. (“It’ll be a landslide anyway!”)

What is “Text Banking”? My first text banking experience

My relationship with politics has changed a lot for me these past four years and only intensified in 2020. If you would’ve asked me a couple of years ago, or even a year ago, I would’ve thought political volunteering just wasn’t a “me” thing. Who has the time? Who has the energy? I’m only one person–is it really going to matter? Fast forward to now–the tides have turned. I wanted to get involved–but needed something that wouldn’t involve a crazy time commitment. And the concept of phone banking seems very daunting to me.

Then Neal’s cousin Dan casually mentioned to me that he had been text banking.

He answered all my questions (which I’ll get to in a second) and I completed my FIRST text banking session last night, and it was so great! So easy! And fun!

I know so many of you are in the same boat as I am, wanting to get more involved for Biden/Harris 2020, but unsure of how to begin. This is the perfect solution–so today, I’ll be sharing all the info about it and how you can do just that!

What is text banking?

Text banking is just what it sounds like–basically phone banking, but via text. So it’s much easier to do, way easier to contact hundreds of people at once. And you don’t have to deal with people yelling at you over the phone. ???? Yes, you will get some colorful responses, but it makes it quite entertaining! You can also easily do it while multitasking, as most responses don’t flood you at once. It’s a great thing to do while watching TV or just catching up on emails.

Why text bank with Texas Dems?

As I said, my first text banking experience was with Texas Democrats, who are out in full force with their text banking efforts right now. Why Texas? Because Texas is the largest battleground state (yes, it can be considered a battleground state!)–and it has the demographics to go blue if voters turn out! (Which is where we come in as text bankers!) Texas has the second most electoral votes in the country behind California–it has a huge role to play in this election!

In 2016, Texas was decided by a single digit for the first time in decades. Hillary Clinton lost the state by only 9 points. Which was a huge improvement on Obama’s 17 point loss in 2012. Since then, Beto O’Rourke built on Clinton’s gains, bringing the margin to just 2.6 points in a race against Ted Cruz. Even though Beto lost, his campaign created a ton of momentum for Democrats in Texas. And helped register at least 670,000 new voters, the majority of which were under the age of 35 and people of color. Will it be a battle? You bet! But is it possible? Absolutely!

The campaign I participated in was aimed at getting voters registered! We were contacting people on the National Change of Address List who have recently moved to Texas and also people from voter registration files. Since Texas recently mailed registration forms, the main purpose of this particular text campaign was to make sure they got their form, ask if they have questions, ask for their support, and provide them with more resources as necessary.

Each campaign will obviously be different depending on the state and the goal of the campaign!

How does text banking work?

First, you’ll sign up for a text banking time slot–right now, you can do so on the Texas Democrats events page 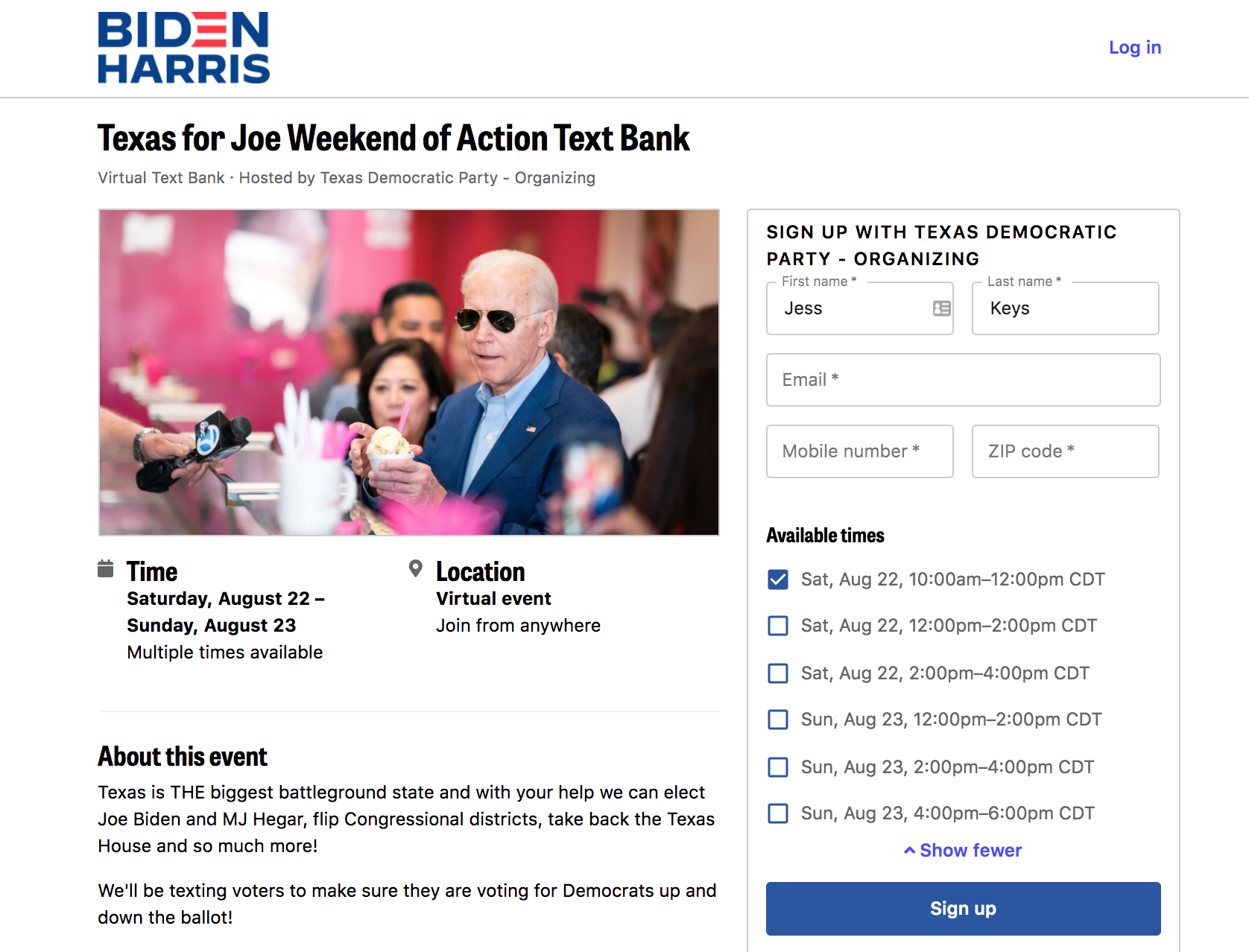 Head over to this page and you’ll see all the upcoming text banking events. (They update frequently so always check back!) and select an event and time that works for you! This is just the organization I volunteered with, but there are many others (more resources below). I think this is a great one to start with though!

Attend a brief training at the beginning of your time slot

You’ll get an email with ALL the info you need. All the “texting” is done through a program/dashboard. Texas Dems use the one called ThruText, but there are others depending on who you’re volunteering with. Essentially, you just need to set up an account and you’ll do all your texting from there. It includes no personal information of yours aside from the first name you provided at sign up. You can do it on your phone but it’s much easier to do on your computer!

The email also includes a training manual, steps with how to set up your ThruText account, a zoom link to log into when your timeslot begins, and more.

If it’s your first time, there will be a brief training via zoom, and then you’ll be able to log into ThruText and get started!

Log in and start requesting conversations, and start texting

People will be automatically loaded into your queue and you will shoot out a pre-populated intro text to 100 people at a time. Each text banking campaign can vary, but for this one, it said something like, “Hi [First name], this is Jess, a volunteer with the TX Dems! We mailed you a registration form–when it arrives, make sure to sign it and mail it in the free pre-addressed envelope to update your voter registration! Can we count on you to vote for Joe Biden and other Dems down the ballot this year?”

Based on how they answer, you will mark them accordingly and also submit a canned response according to a script. (Yes, you will get plenty of “F**K YOU! MAGA FOREVER!!!!!” responses ???? but also have some really heartwarming, hopeful conversations too.) You don’t even have to type–you just select the response, double click, and it loads for you.

It’s ALL there for you, very straightforward and after you watch the training you’ll get the hang of it really quickly. It’s quite entertaining, and like I said, a really great thing to do while watching TV. I just poured myself a beverage, made myself a snack, and it was a nice little evening activity!

Additionally, the moderators stay live on the zoom your entire shift, so you’ll be able to ask questions live in the chat. There is also a slack channel for any questions that arise after the shift time is over!

If possible, be available the next day to respond to any lingering responders

They ask that if possible, just be around to monitor any responses that come in after your shift is over. If you have unread responses in your ThruText inbox, you’ll get an email alert so you can log in and respond to them between 9am-9pm CST. If you are unable to be around outside your shift hours though, it’s not a big deal, and you’ll just fill out a “sign off” form and then any responses you get will be reassigned to someone else’s queue.

Want to join the text banking party with me!?

If you have any free time this weekend, there are several time slots still available for Texas Dems!

Additionally, I highly recommend signing up to “adopt” a swing state (or a few!) with Vote Save America, where you’ll be updated on all the ways to help mobilize the vote in your adopted swing state. FYI–I recommend signing up for a couple states, as they all have different opportunities and it’s nice to have more options that align with your schedule!

No amount of time is too short, no effort is too little! Let’s do this!

Like President Obama said in his DNC speech last night–WE are the missing ingredient, the ones who will decide whether or not America becomes the country that fully lives up to its creed.

“What we do echoes through generations…let’s fight the good fight!”