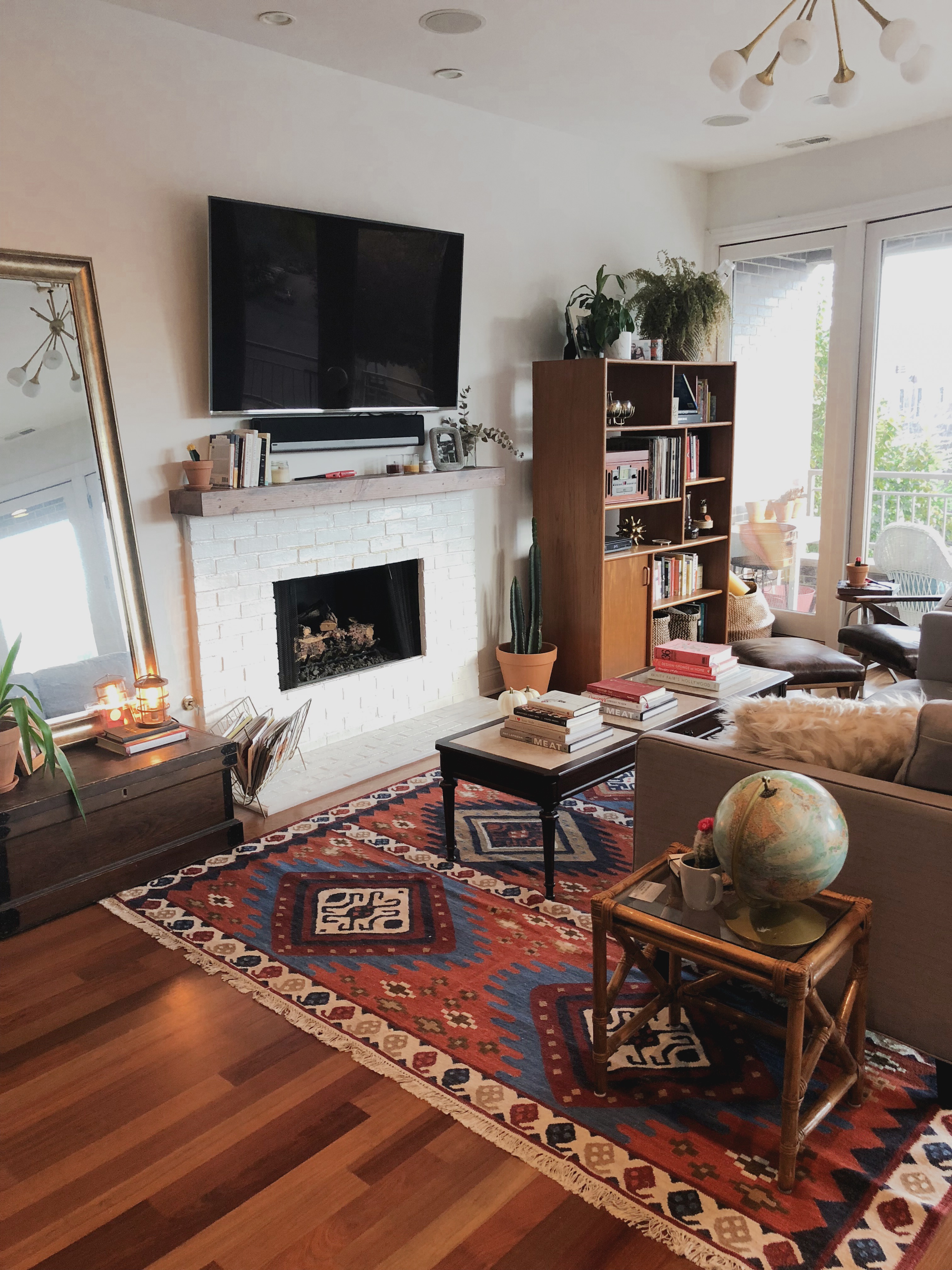 Rug: Atlas Weavers (they don’t have this specific one listed on their site, but if you reach out to them, they will make it for you!) Coffee Table: MegMade, Gold Mirror: Wayfair, Trunk, end tables, bookshelf, all vintage.  Chandelier: Bellacor

Happy Wednesday (that feels like Tuesday ? I’m so going to be thrown off all week.)

I came down with a cold on Monday afternoon and spent most of yesterday in bed. I was super bummed that I had a shoot scheduled but I had to cancel on the account of me looking like a gremlin (you know when you’re sick and you can just see it in your eyes, and no amount of mascara will fix it?)

Anyway, before the sickness set in, my friend Kira (who is also an interior designer) came over on Friday because one of my biggest goals for 2018 is to ACTUALLY finish our house. We moved in when we were engaged and all extra time/funds/emotions/everything in our lives went toward the wedding. Now we can finally shift our focus to you know, things like finally getting around to hanging artwork on the wall?

After a couple of hours catching up AND going through our whole house and making a to-do list of everything that needs to be done, I already feel EXPONENTIALLY better. I thought it would be fun to share with you our to-do list and document our projects as we go. I even checked off a few items on Saturday, which I’ll share with you below–including some inspiration photos as well! 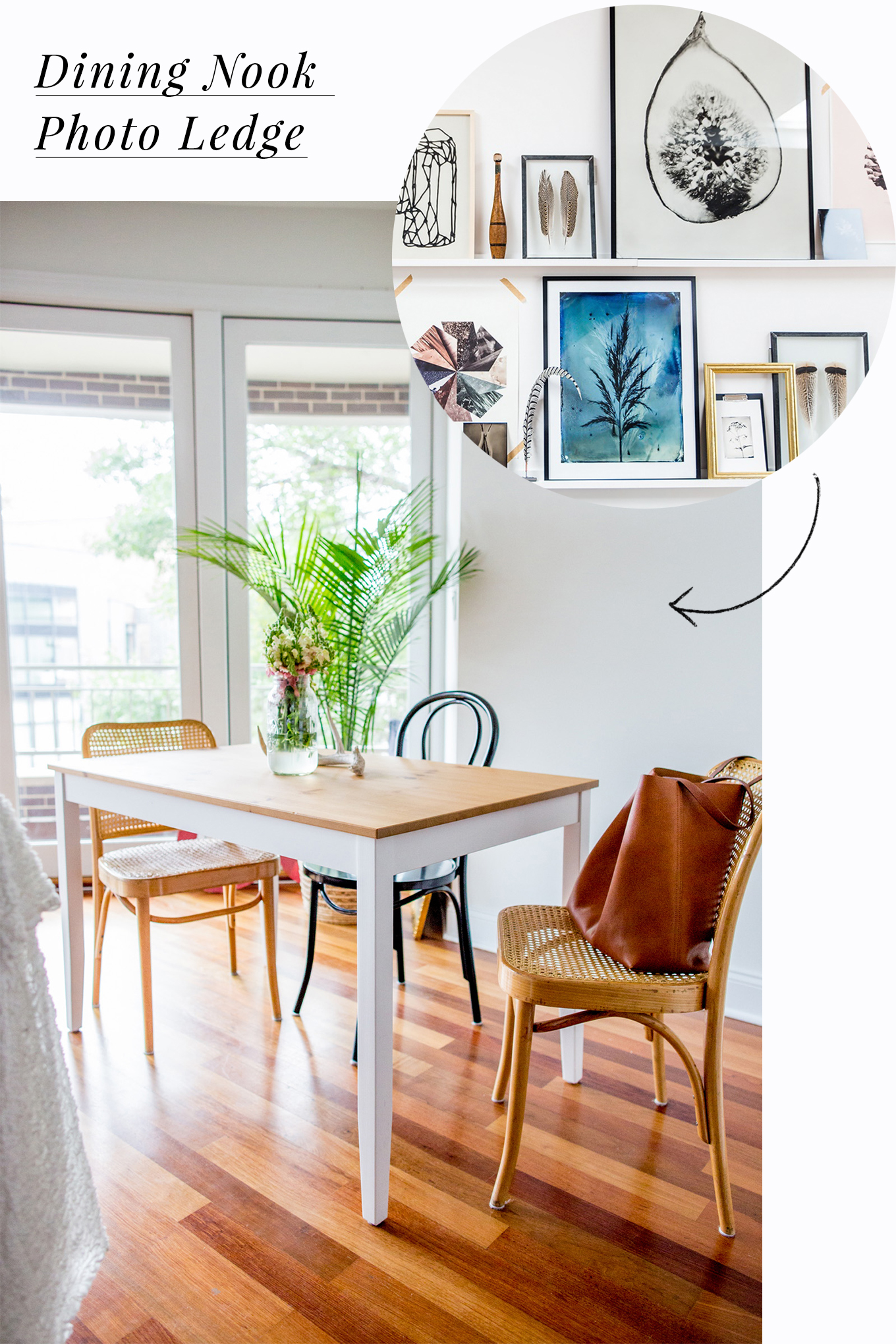 Okay, this is a VERY old photo of our “dining nook” that was taken right after we moved in (it looks so bare, haha! We’ve since updated a lot, but, you know, just for visuals’ sake, I thought I’d include it!)

One of the things I’m most excited about is our idea of the corner picture ledges in the dining nook. Rather than having two different sections of picture ledges, we’re making them come out from the corner so they’re a bit more off-center and visually interesting. (This was all Kira’s idea!) I ordered the picture ledges from Wayfair and the frame set from Houzz. I’m planning for it to be a mix of black and white photographs as well as artwork so it will all look cohesive!

Statement art above the bookshelf:

I have an idea of what I want to put here, but I’m keeping it a surprise for now! One of Kira’s biggest design tips is to play with height, so we wanted a cool framed big statement piece that will sit on top of our mid century bookshelf. Looking into Framebridge to do this but if you have any other favorite framing places I’d love your reccos!

When we purchased our existing sofa, we lived in a teeny-tiny one bedroom that was basically a studio. Now, we have more space, so a couch upgrade is very necessary. We really wanted a couch with a chaise but sadly that isn’t in the cards because of the way the room is shaped, but we definitely want something longer and deeper so we can both actually lay on it at the same time without risking toppling over onto the floor ?

I have weird attachments to things that I bought right out of college, and this old trunk I scored at Goodwill for $15 is one of them. I think it’s so cool and it’s served many purposes–a coffee table, a nightstand, a side table, a bench–it’s so versatile and great for storage, but it needs a little TLC. I’m planning to take it to MegMade so she can stain it dark and put gold hardware on it! (Meg, if you’re reading this, I swear it’s on my to-do list to email you about that this week ?) Have you been to MegMade? It’s the BEST. She revamps vintage furniture and you can customize it into your own, one-of-a-kind piece, likely for less than you’d pay for anything new! (Inspo for the trunk “facelift” is from from local designer Claire Staszak’s home featured on Homepolish!) 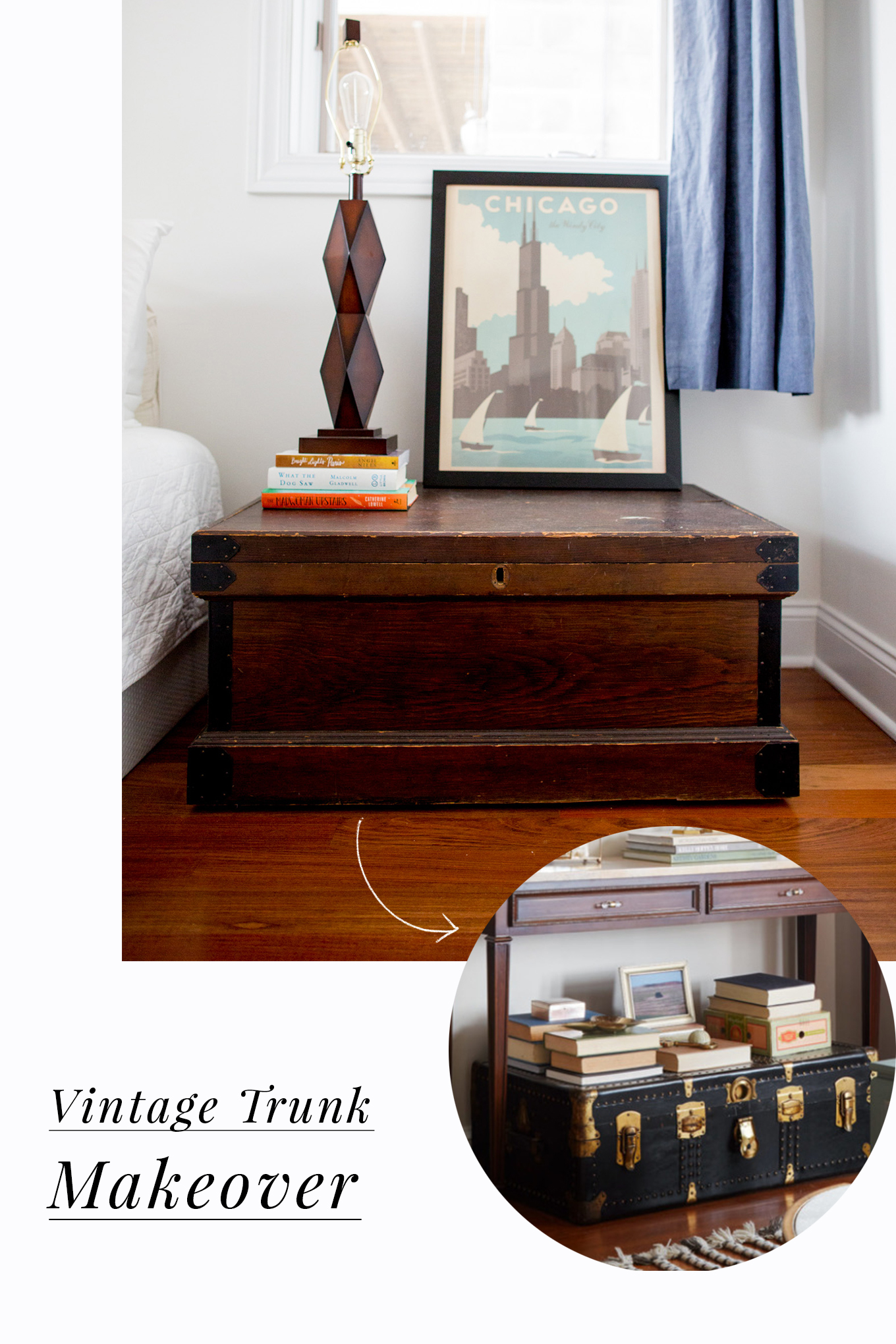 Remember over a year ago when we ripped out the kitchen light fixtures because I couldn’t take them anymore? (They looked like plastic ice cube trays from the dollar store ?) Well, we still haven’t replaced them and have had holes in our ceiling for MONTHS. I just scored these awesome pendant lights on sale for FIFTEEN DOLLARS at Jayson Home. (Kira spotted them! I can take no credit!) I’m so excited to get these installed!

We’re toying with the idea of redoing the kitchen backsplash and countertops. Plus putting in a farmhouse sink later this year. You know, something more modern and updated, yet timeless and classic–white subway tile with white quartz countertops (leaving the dark cabinets as-is!) Thankfully we have Kira for this because we wouldn’t know where to start otherwise! When we first moved in, I really, really hated the kitchen, but after we painted the walls white and updated the cabinets with gold hardware (which was so easy, I did a whole before/after post here!) I think it’s made it much more aesthetically pleasing to where I don’t notice it as much anymore.

Okay we don’t actually have an “entryway” but we do have an IKEA shoe cabinet that serves as a catch-all entryway “station” if you will, which I’m hoping to spruce up. I ordered this Italy print from Cassandra’s Etsy shop (it’s of the Duomo in Florence, where I studied abroad, so it definitely has special meaning!) Her prints are only $10 and you print them yourself–so easy! She has SO MANY to choose from! I’d also love to swap out the knobs for more gold modern ones! This Etsy Shop has some really cute one’s I’ve got my eye on! 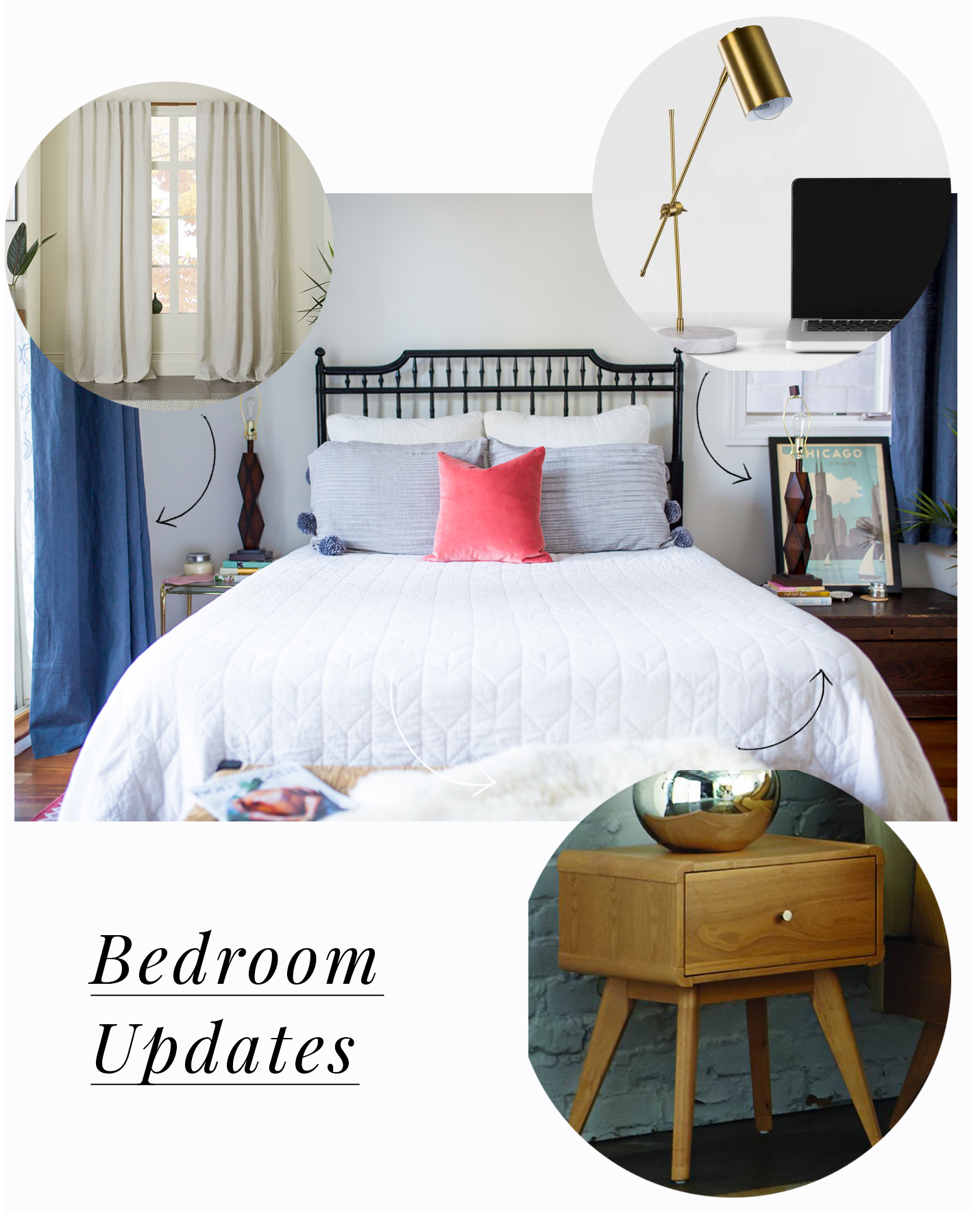 I will wholeheartedly admit, our master bedroom has gotten the complete shaft when it comes to decorating. It has always been the room that got shoved way down to the bottom of the list. Simply because it was the room that people saw the least when they came over. It feels so good to have a plan in place to finally finish it. Here are the big updates:

FINALLY swap out the curtains.

When we moved in, the curtains were leftover from the previous owner. They’re fine curtains, but the blue color doesn’t really work with our decor, so I’m really excited that I finally ordered these neutral curtains from West Elm that are on sale! They will go a lonngggg way in making everything look more pulled together.

Kira and I aren’t fans of the existing window hardware. It can be expensive to replace. So Kira had the idea to simply swap out the finials instead! I ordered these cool geometric ones from West Elm so fingers crossed they work!

Guys. Yikes. How did I let us go so long without real lamps with lampshades on them? For awhile I convinced myself this was cool and that they were more like sconces but I don’t know. I have issues. Decor isn’t my #1 speciality, okay?

We just ordered these mid century inspired nightstands from Wayfair as well as these gold lamps, and we LOVE them. Who would’ve thought that matching nightstands and lampshades would’ve made the room look so much more grown up ?

Statement artwork above our bed:

I have an idea for what I want to go here. But again, I’m keeping it a secret for now! I love the idea of one giant print in a pretty frame hanging above the bed. So that’s the plan as of now!

That’s it! Can’t wait to keep you posted with our progress along the way! 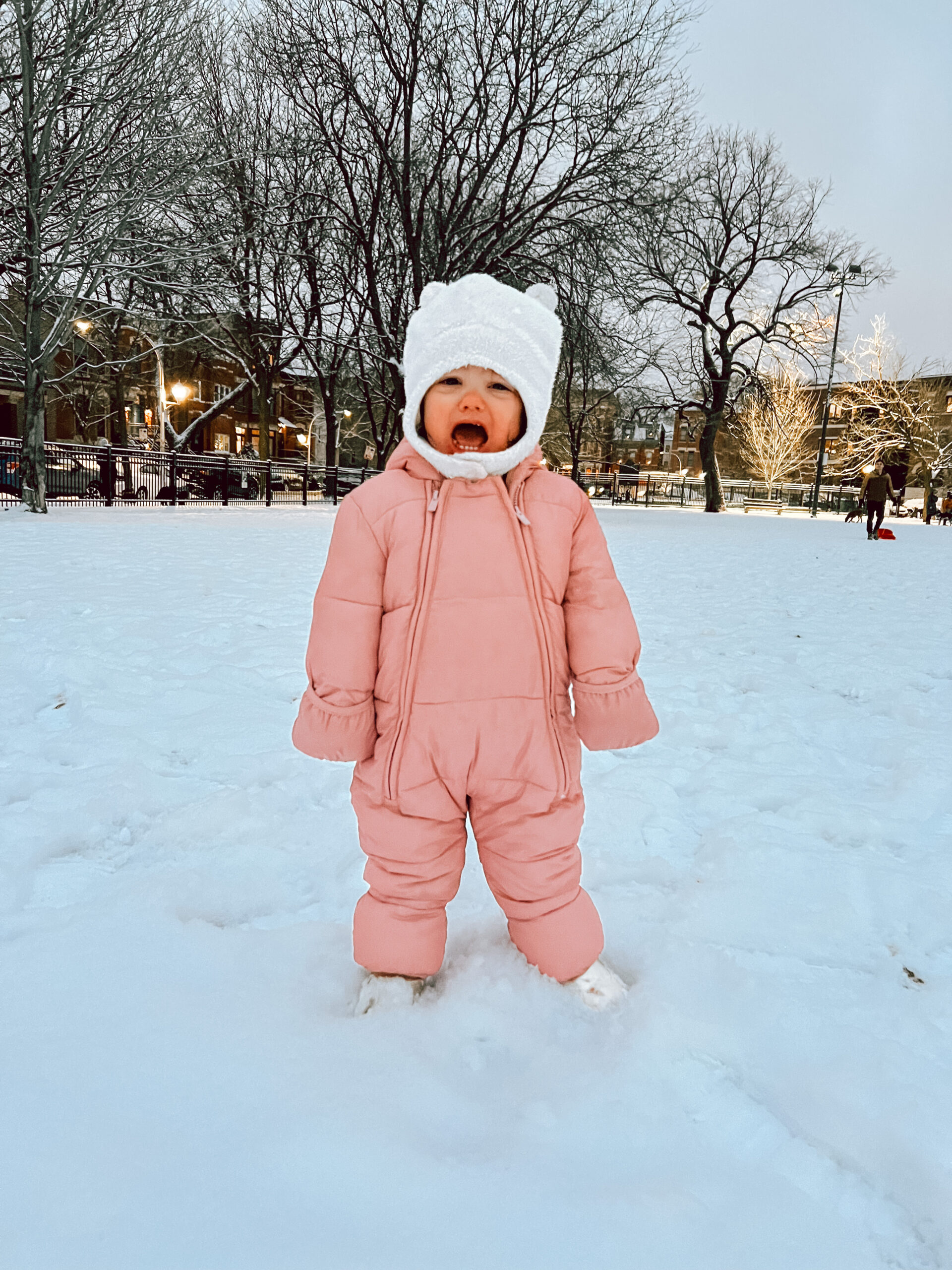 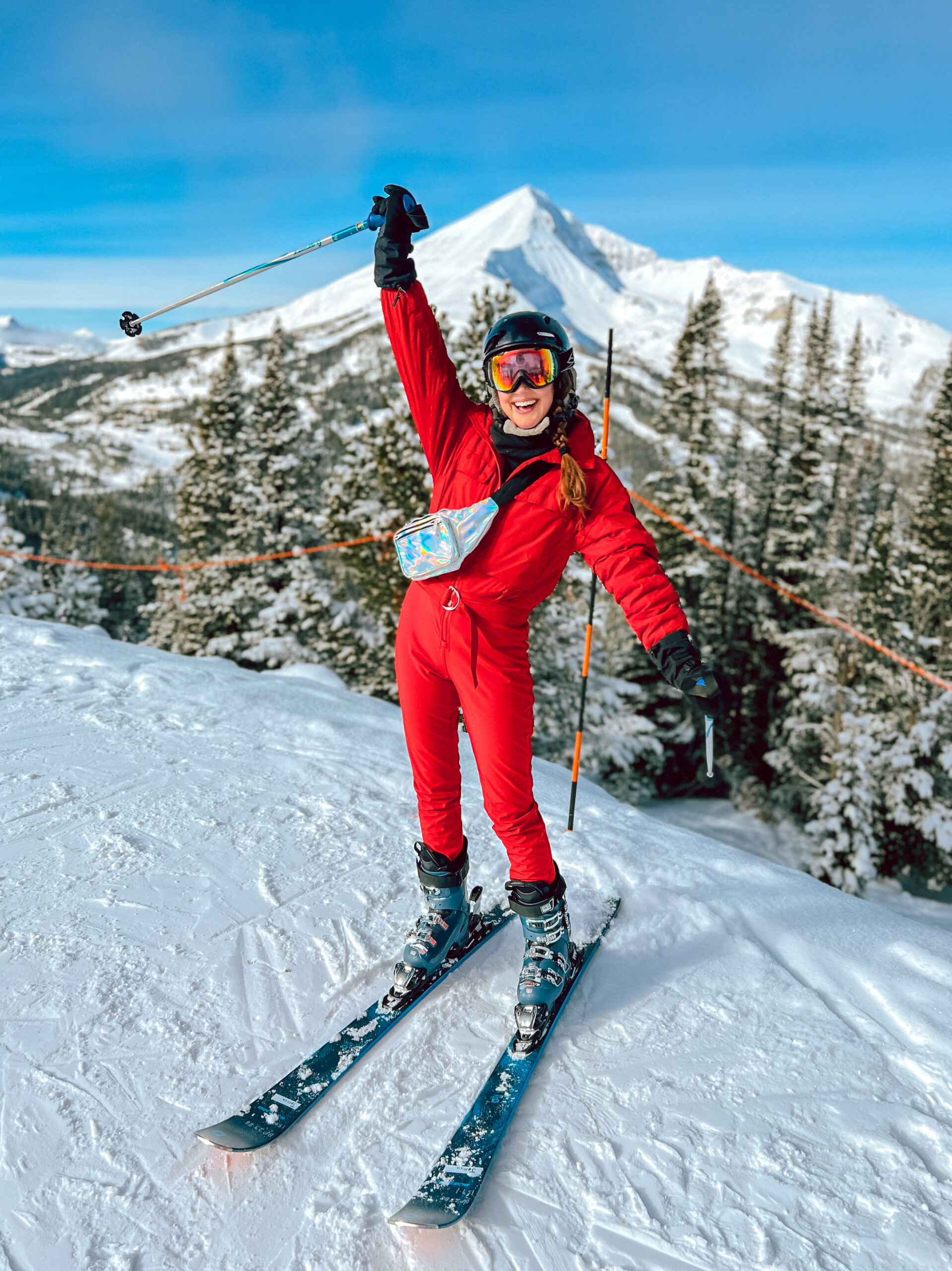 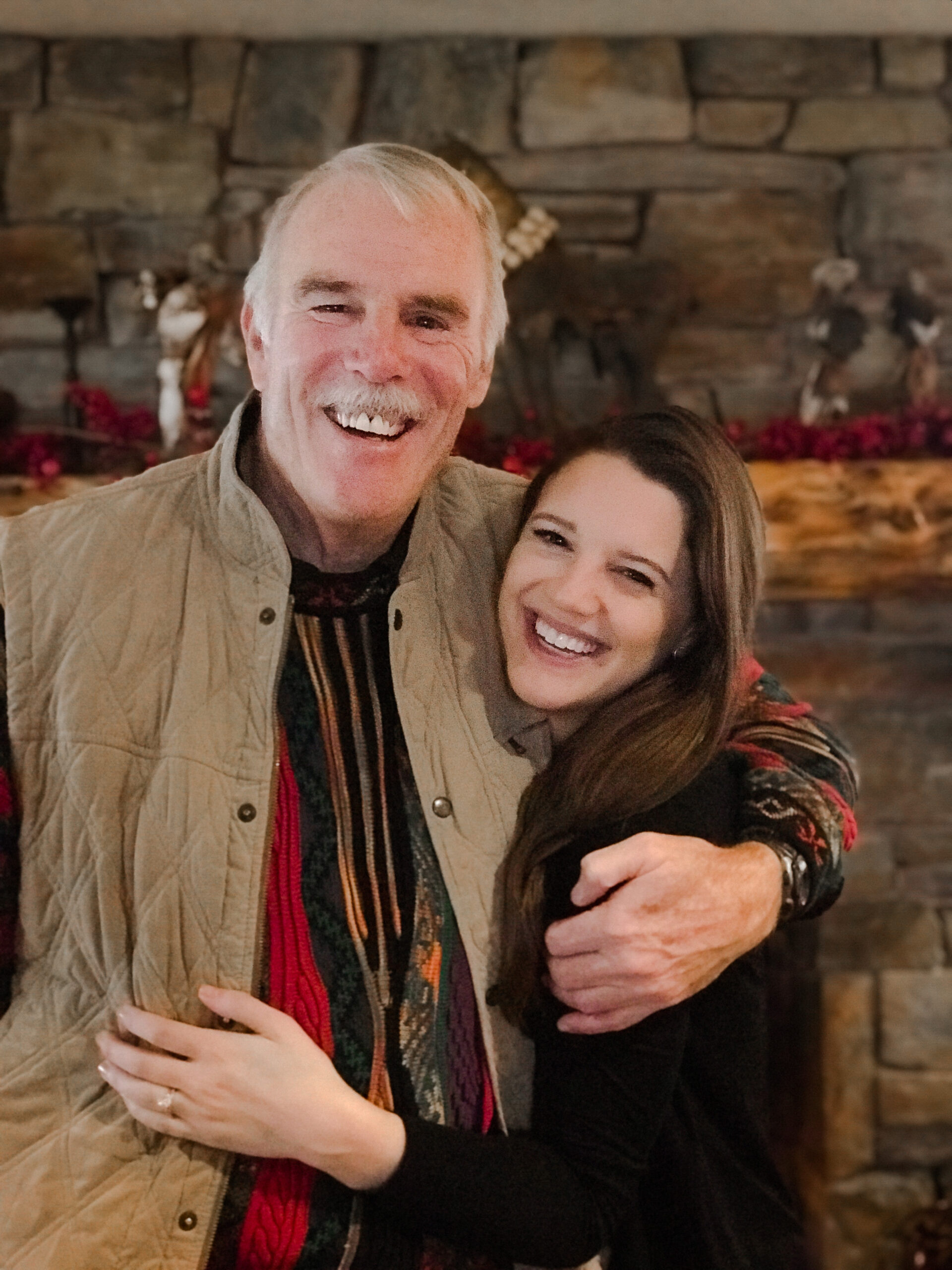 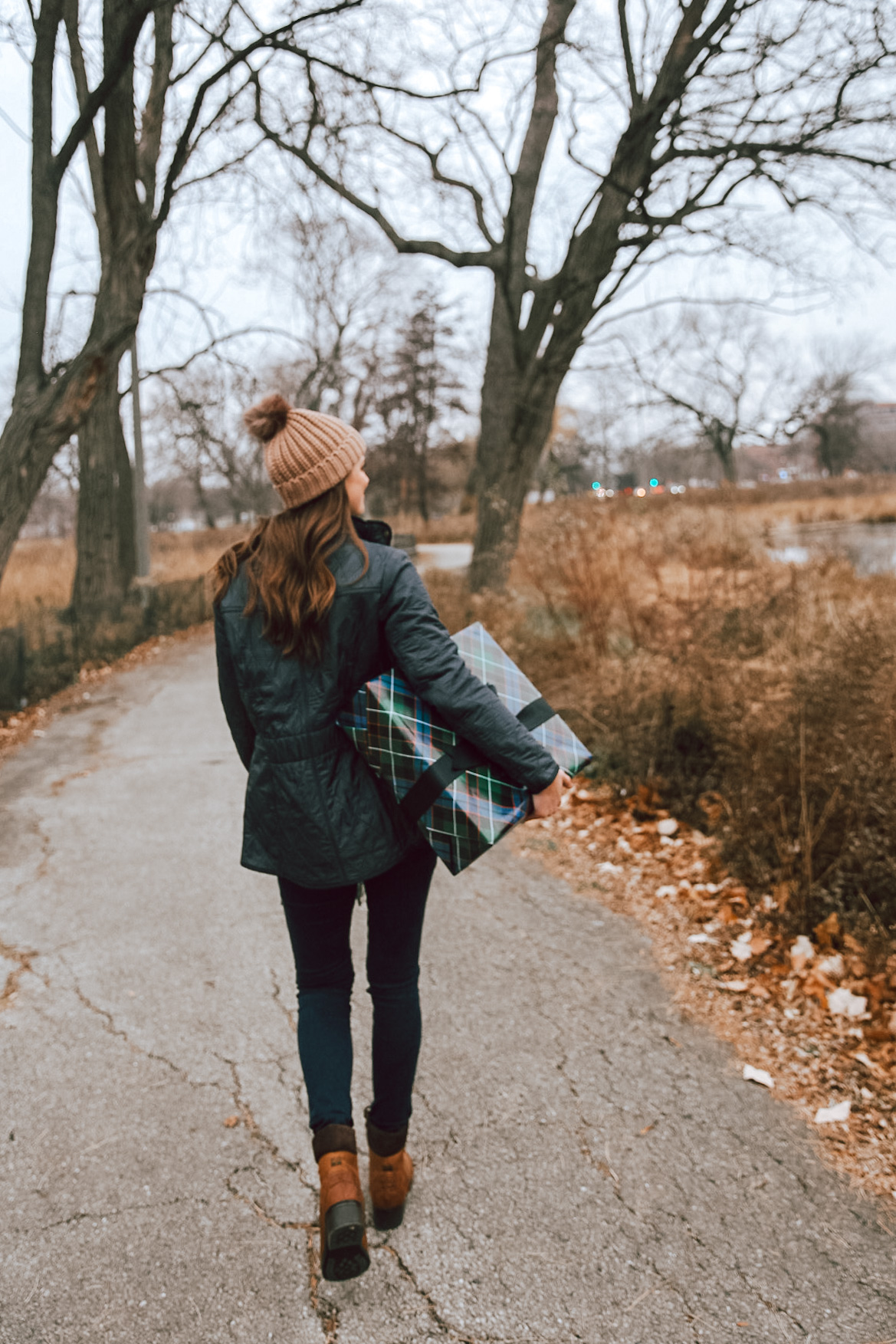