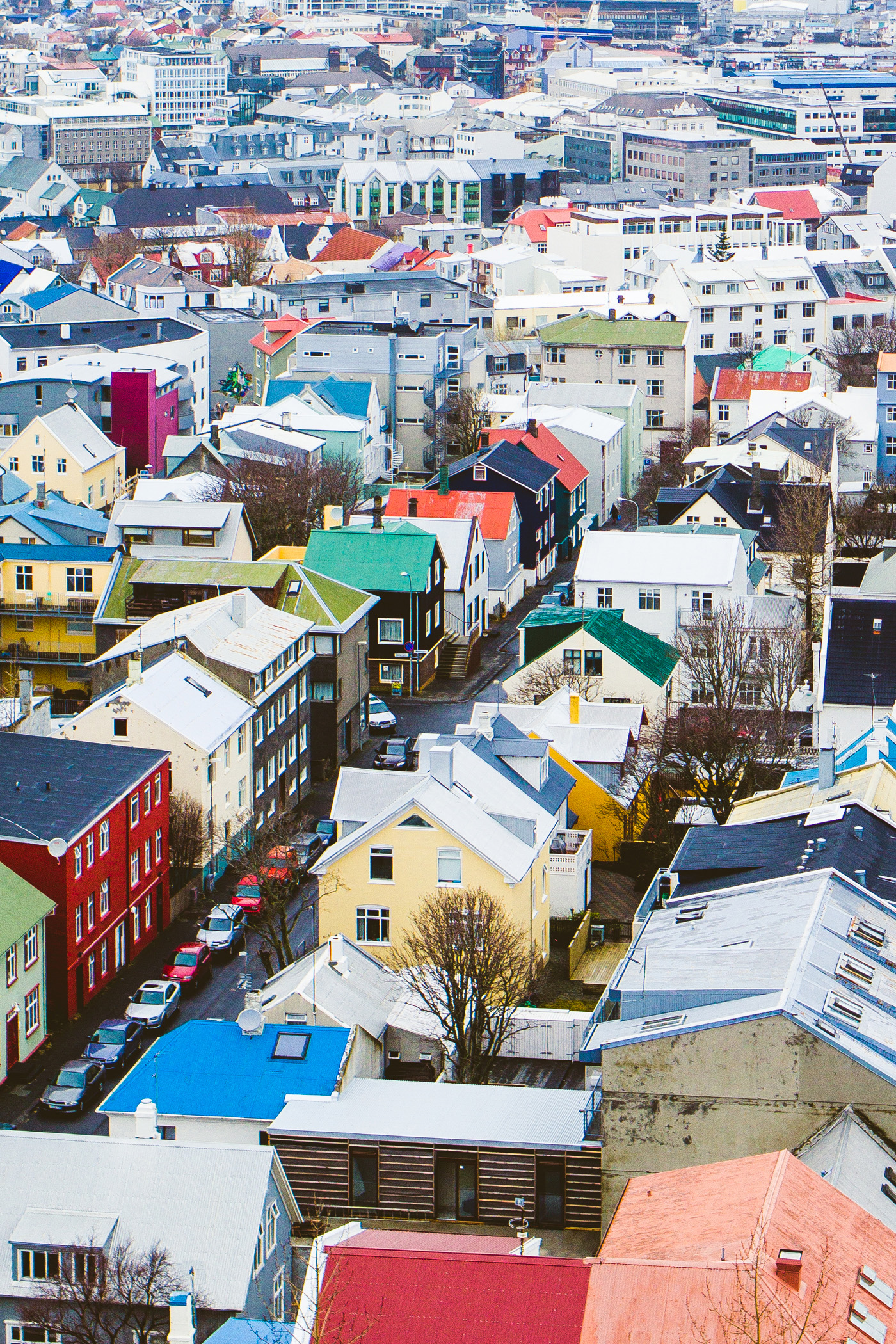 As you know, a couple weeks ago I took an amazing three day trip to Iceland, thanks to IcelandAir! The airline just launched new direct flights from O’Hare to Reykjavik–thus, the reason for the occasion. To call it “the trip of a lifetime” would be an understatement.

If we’re being totally honest here–I didn’t know what to expect before I embarked on this adventure. I’d seen beautiful photos on Pinterest, but Iceland was never really on my radar–it seemed so far away and out of reach. (Shocker–it actually isn’t!)

I’m also not an outdoorsy person–hiking and being exposed to extreme weather is really not my thing, and when you grow in the forests of Oregon, one of the most beautiful places in the country, breathtaking green landscapes are an everyday occurrence. (Would I truly appreciate all it had to offer?) This made me a little nervous.

So, as you can tell–there is so much that I have to share with you about Iceland, and I’m so excited to be able to do that today!

Maybe you’ve been considering taking a trip to Iceland for awhile, or perhaps, you’ve never even given it a thought–regardless, it deserves a place at the top of your travel bucket list.

How to get there: 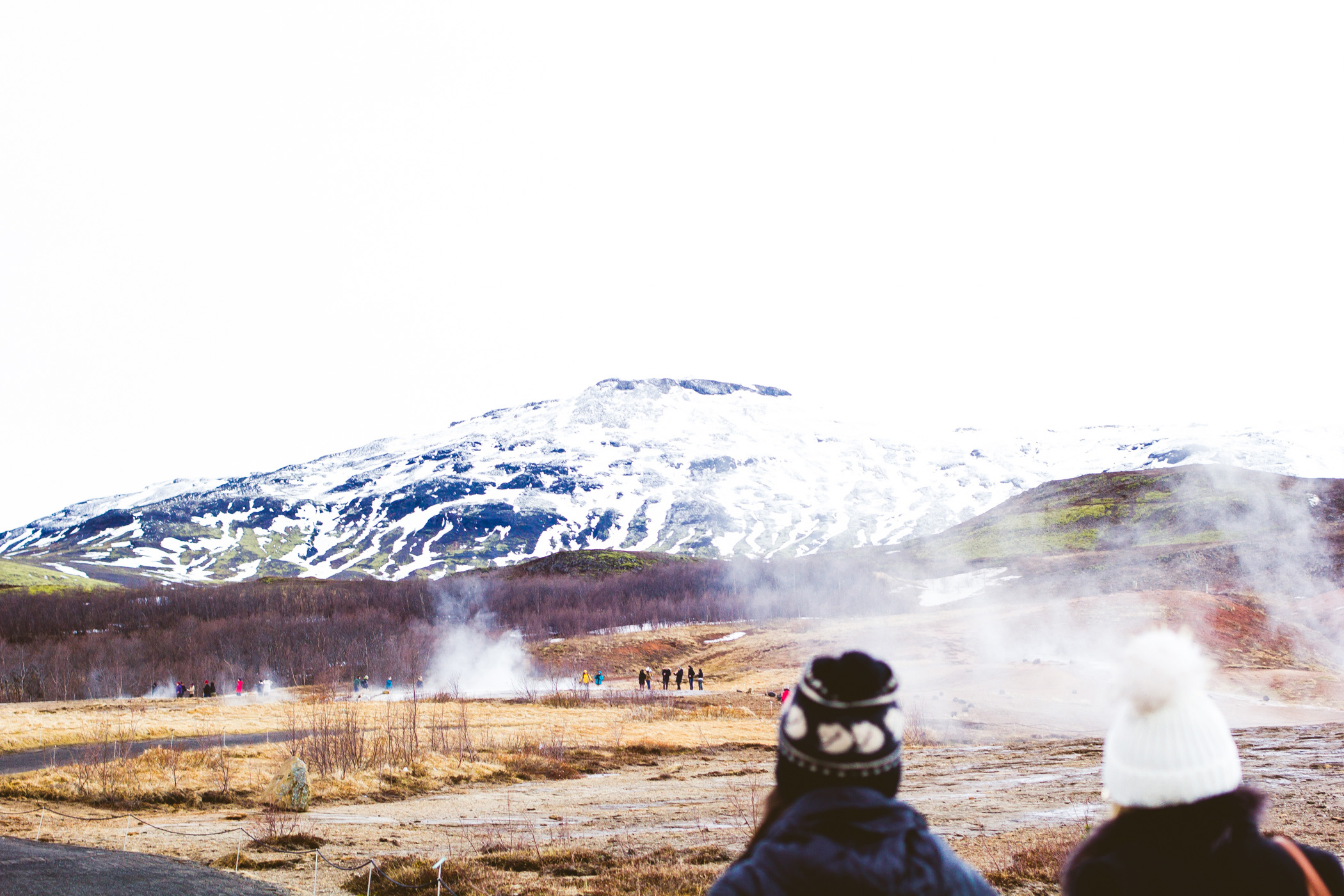 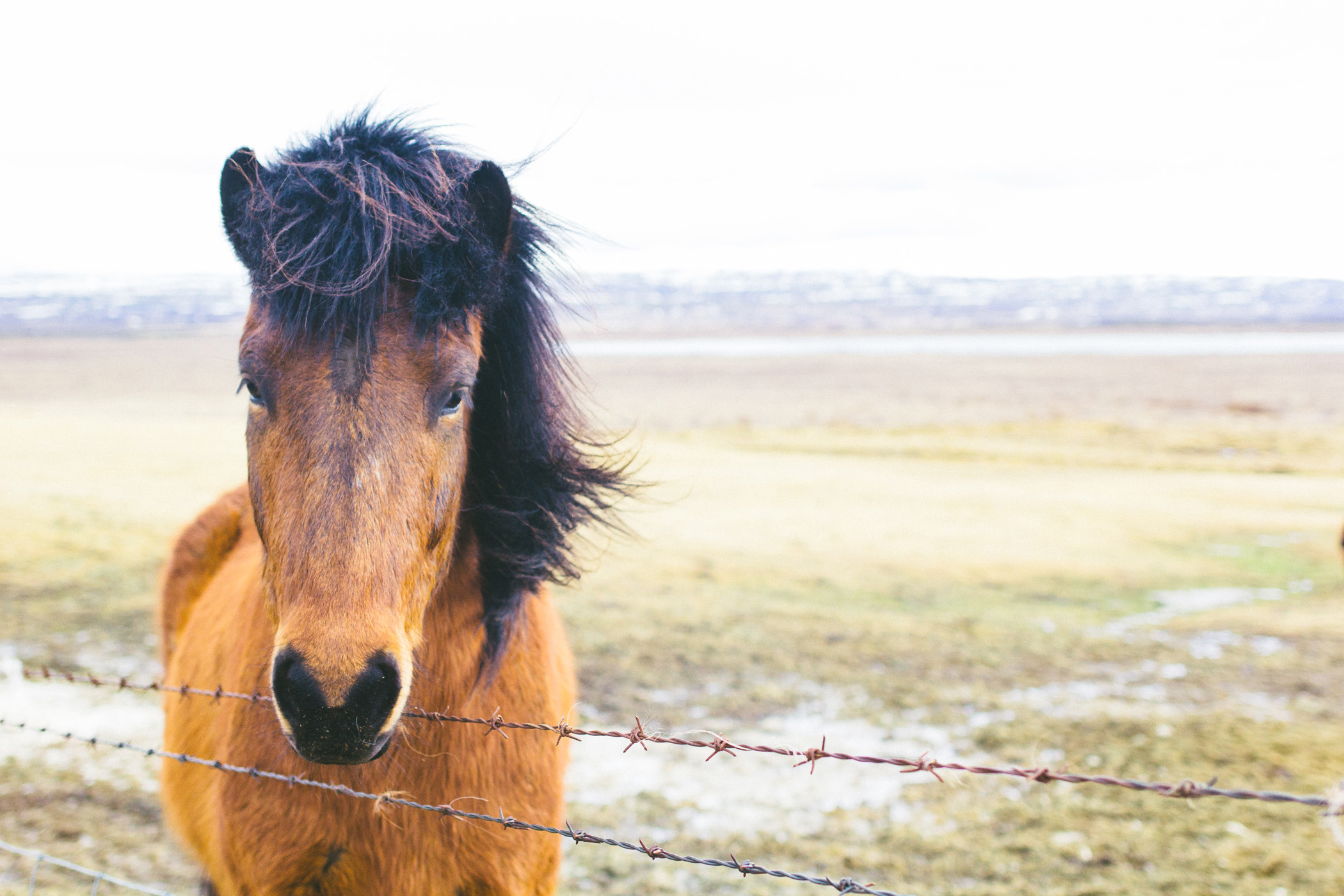 Did you know that you can fly IcelandAir to nearly any European country, and do a stopover in Reykjavik for free? We took a direct flight from O’Hare to Keflavik, which is about 45 minutes outside of Reykjavik. The flight was only 6 hours from Chicago! Can you believe it actually takes me more time and money to get home to visit my family in Oregon than it does to go to Iceland?

So, what is an “Iceland Stopover” anyway? It essentially means that you can stop in Reykjavik for up to a week with no extra flight costs. So, stop in Iceland on your way to or from another city, or make it your final destination! IcelandAir also has their own hotel on Reykjavik’s harbor (more on that in a second!) so setting up your trip is a snap.

(Also, I took this carry-on suitcase and it fit WAY more than I needed! I’d highly recommend it if you’re in the market!)

Where to eat & drink: 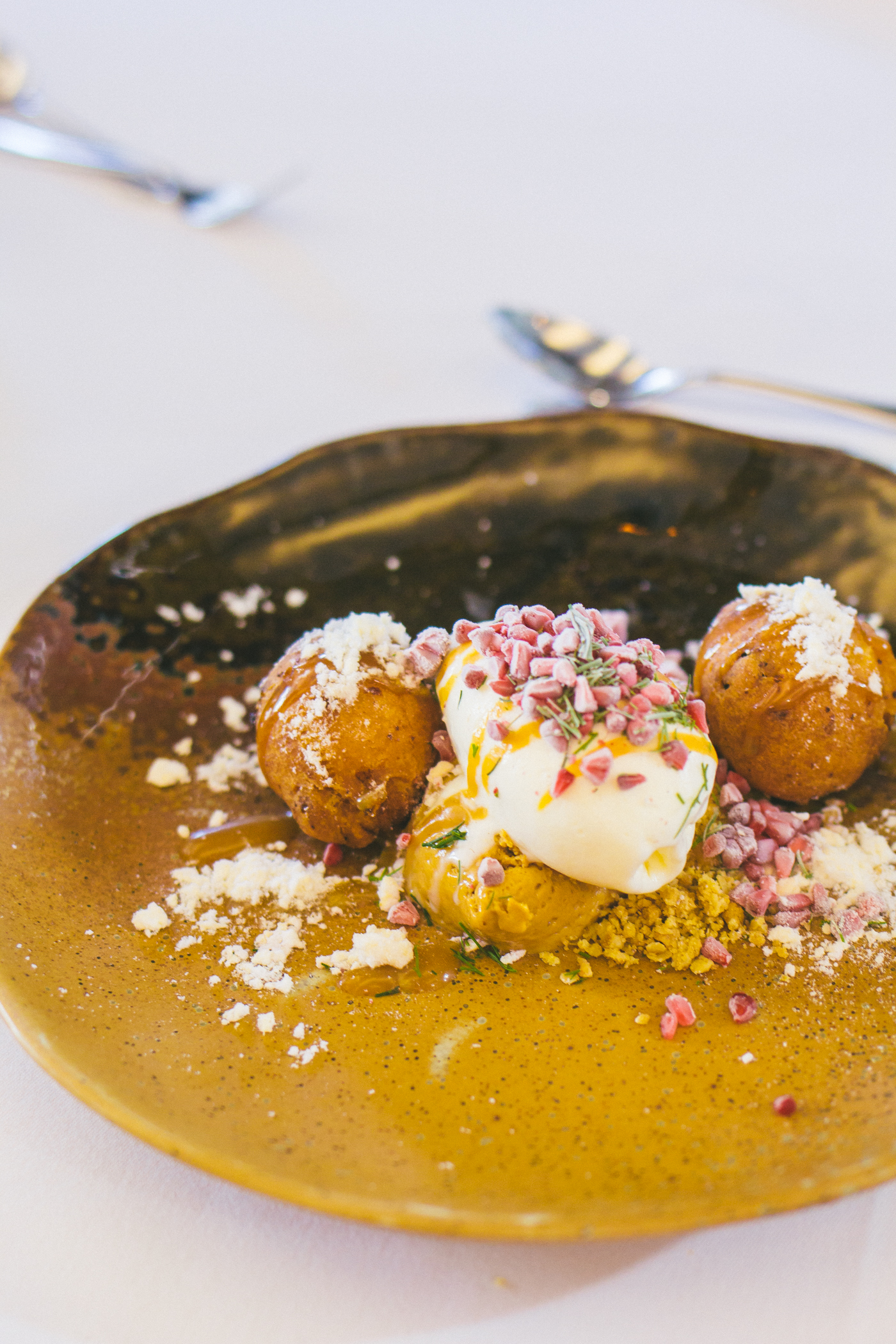 Iceland is known for their fresh seafood, so if you’re a seafood lover–you’ll love it! Unfortunately I don’t eat anything that swims, so things were a little more limited for me, but I still had some really good meals!

Grillmarkadurinn: The group ate here on our first night. The downstairs was underground and had really cool cavernous decor. (Blair and I loved the giant wooden slab tables!) Danielle and I split chicken with a side of fries and roasted veggies, which were really good. This sounds weird, but we were all addicted to the bread and butter they served before dinner.

Slippbarinn: Cocktails here are a must! It’s located in the hotel, but the craft cocktails aren’t from your average hotel bar. The decor here is also fun and nautical.

Kryddlegin Hjortu: We stopped at this cute lunch spot during our tour around Reykjavik–it was a Mediterranean with a really soup and salad bar that totally hit the spot. (Ideal if you want a change from traditional Icelandic food!)

Efstidalur: If you go on the Golden Circle Tour (which is an absolute must!) You have to stop for lunch at this adorable spot! It’s a family-owned farm, and the restaurant is a beautiful, rustic, rehabbed hay barn. Everything we had here was great! Post lunch ice cream was obviously a must (you know, being a dairy and all). I got the caramel ice cream and it was to die for.

Tapas Barinn: Blair and I grabbed Tapas here on our last night, and everything was absolutely delicious. I have to say, it was pretty interesting to compare Iceland’s version of Spanish Tapas to what I’m used to in the US, but they were equally as tasty. We ordered the beef tenderloin skewers with pesto, the mushroom and leeks, and pickled cherry tomatoes with marinated mozzarella. (And now I’m hungry again thinking about it.)

Lava Restaurant at Blue Lagoon: The last meal of our trip! Lunch in your cozy robe after a swim in the Blue Lagoon is an absolute must. The food here was phenomenal. Make sure to get dessert! I totally felt like a lady who lunches. 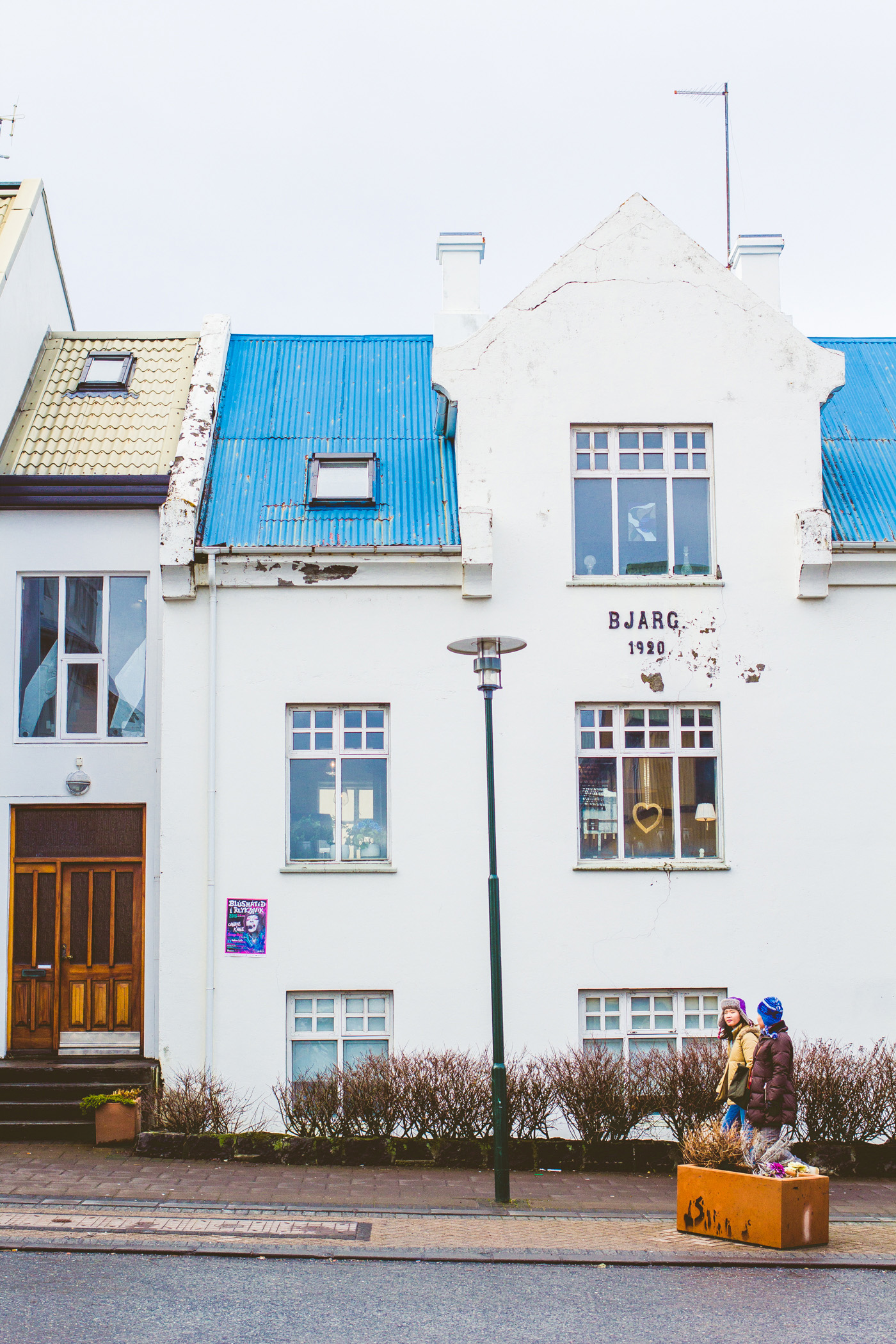 We stayed at IcelandAir’s hotel on the harbor–called IcelandAir Marina. At first I was a little suspicious of a hotel named, “IcelandAir hotel” (probably from all my experiences with sketchy European airlines like RyanAir during my time studying abroad.) But I was so, so wrong. The hotel was beautifully designed in every way. No details went unnoticed–the rooms exceptionally clean, and the location was perfect.

The decor had so much personality, and my room had one of the most exquisite rain showers I’ve ever used, with complimentary L’Occitane soaps, shampoo and conditioner. (AKA heaven after a long, cold day of sightseeing!) You can get a really great package deal if you book both flight, hotel, and your activities through IcelandAir! They have a really cute cafe/coffee shop and restaurant and cocktail bar. 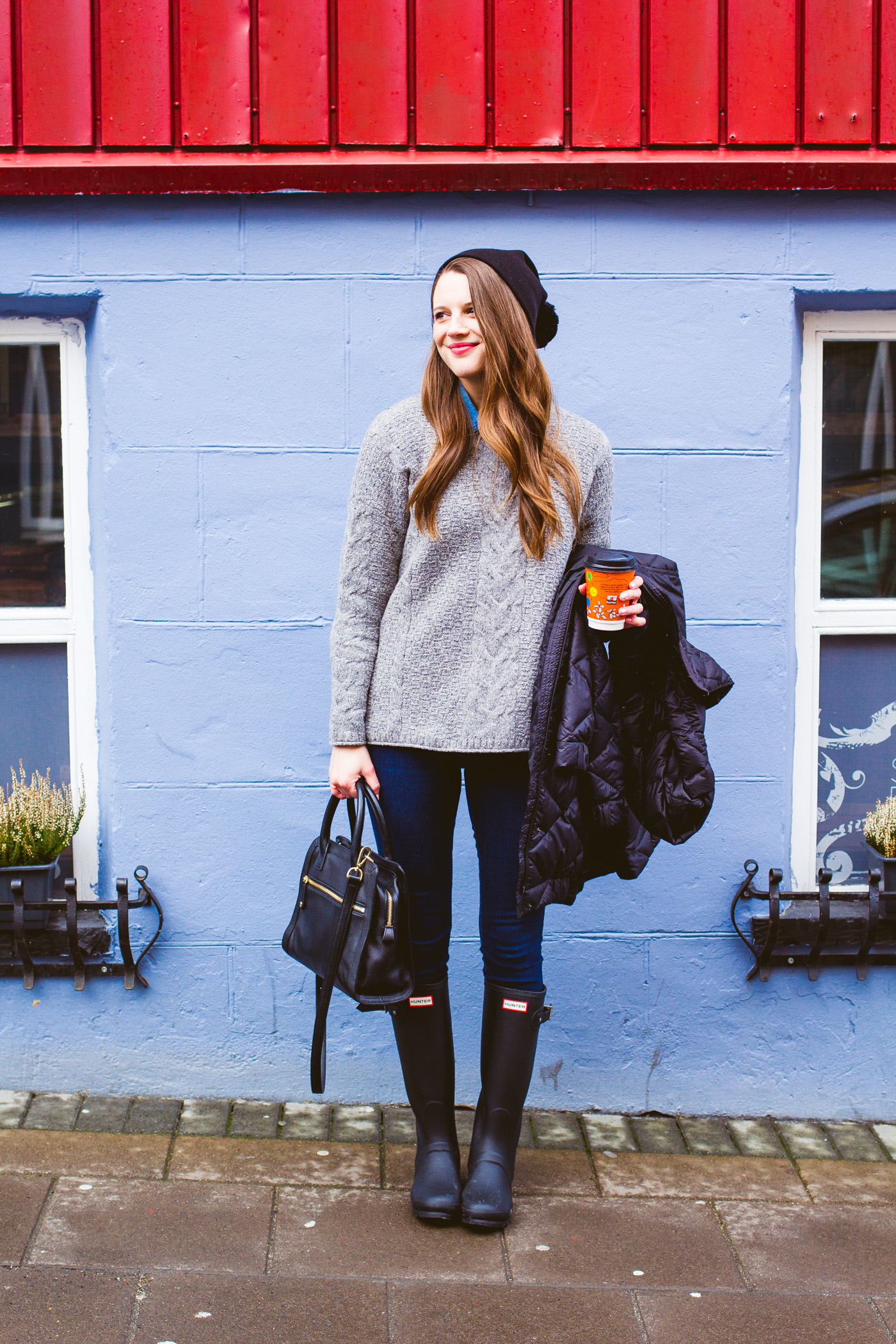 I’d recommend spending a few hours exploring adorable Reykjavik during the day! We landed the first day around 7am, and promptly hit the ground running to explore the city! It’s quiet, colorful, and very easily walkable. (You certainly do not need to rent a car.)

Icelanders have a ton of pride for their city, and it shows. The clean streets are lined with colorful houses, shops, bars and restaurants. Pop into one of the many stores to get an Icelandic sweater–although, be warned, they’re actually really expensive! (Think, over $250). I was going to purchase one but ended up splurging on a Blue Lagoon set of face masks instead. (More on that below!)

Don’t miss the Lutheran church at the top of the hill, as it’s one of the best views of the city! We also drove out to the beach, where we stumbled upon a young college couple hot tubbing in what was meant to be a hot springs foot bath. (Hilarious, and also, best photo ever.) Don’t worry–they weren’t naked, I promise. 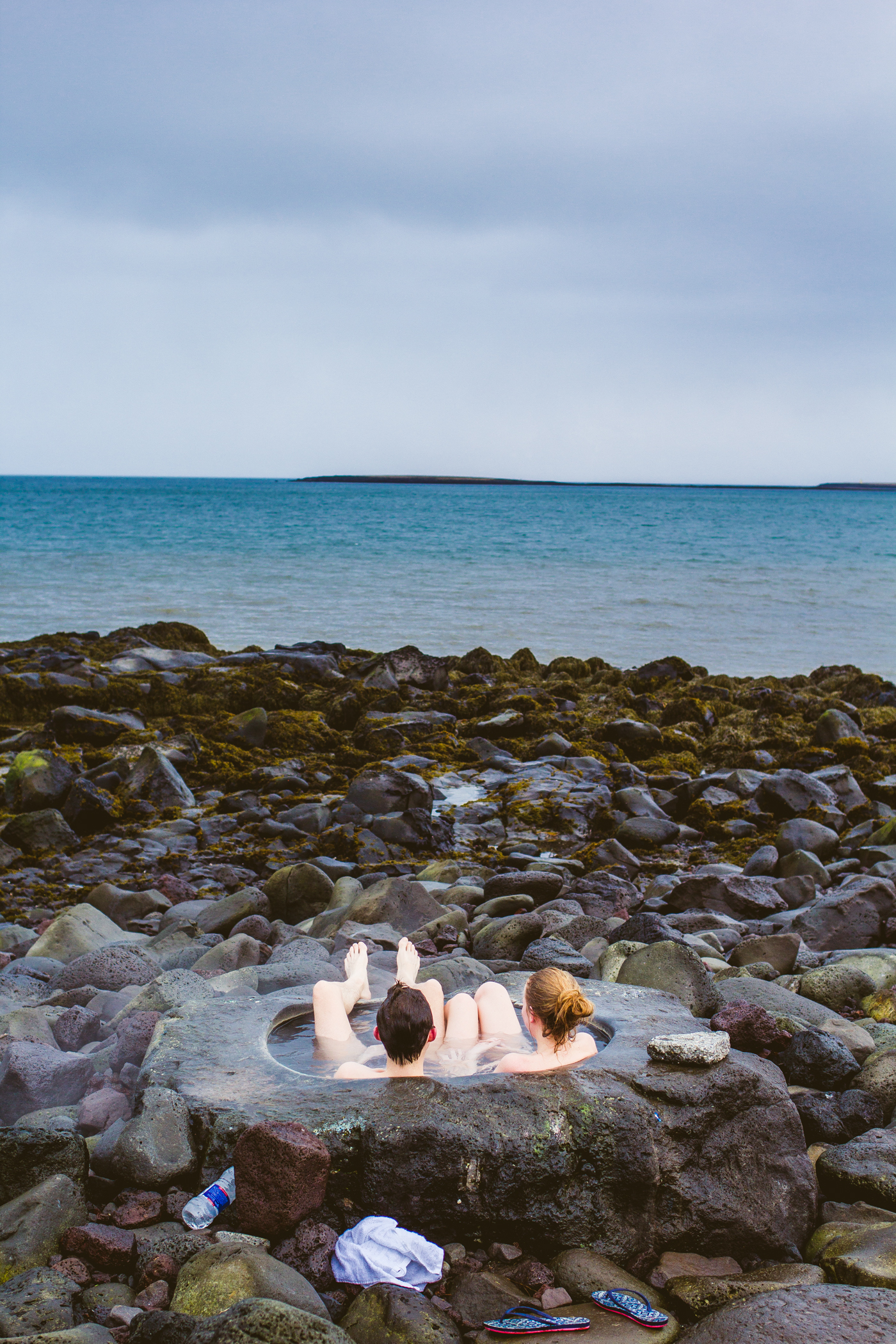 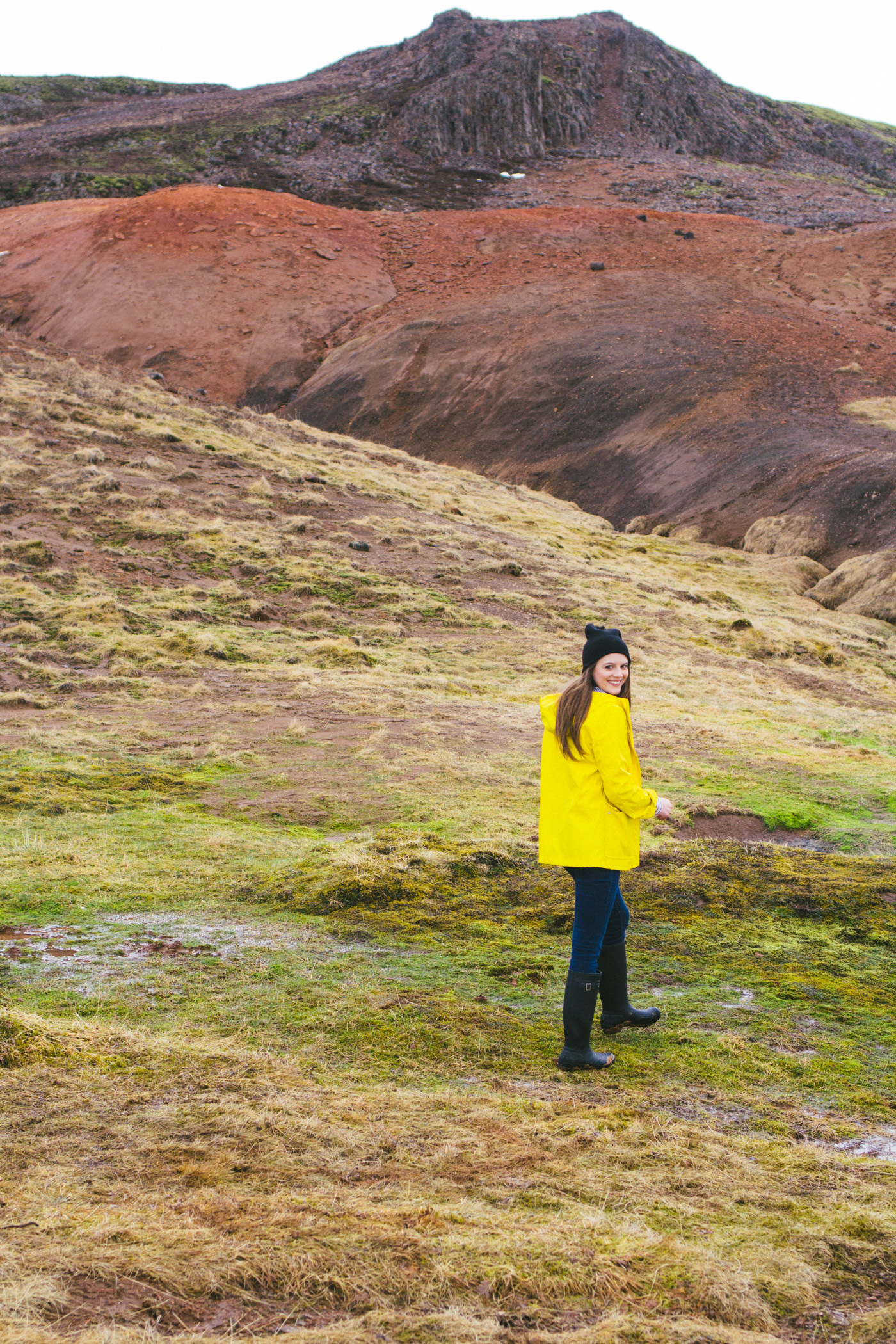 The second day we took a Golden Circle Tour with SuperJeep. It was an amazing way to see some of Iceland’s most beautiful sights–our tour guide, Jacob, was hilarious and gave us lot’s of interesting tidbits along the way.

Geysir: One of my favorite sights was Geysir (AKA geysers!) Did you know that the first ever geyser was discovered here, named “Geysir” and that’s where the term “geyser” comes from?  There were several here, but only one was erupting at the time–about every ten minutes, sending hot water up to 70 meters in the air! The view from Geysir is also spectacular. There were several hot pools surrounding it, all a deep blue that almost looked Photoshopped! It was stunning. 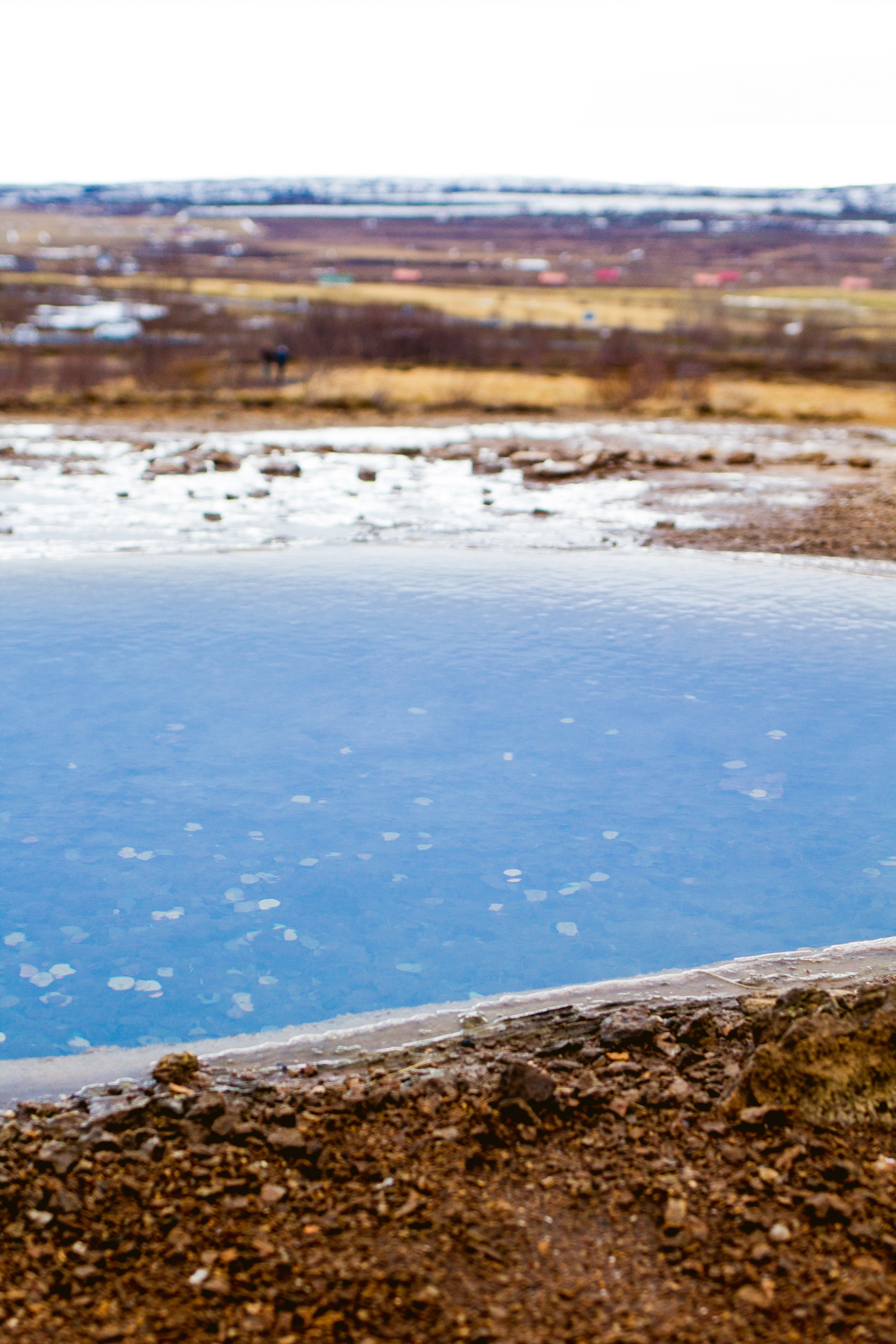 Gulfoss: Next, we stopped at Gulfoss–the biggest waterfall I’ve ever seen. It was breathtaking! If you were following along on snapchat, you saw how windy it was! Blair and I almost got knocked over by the wind.

We then drove around the Golden Circle, through feet of snow up onto the mountains. This felt akin to being on Thunder Mountain at Disneyland–be warned, bring your dramamine! Blair and I unfortunately get really carsick, so that was kind of a bummer, but I would totally do it again just for the beautiful views! (In the summer, it would be much easier on your stomach!) 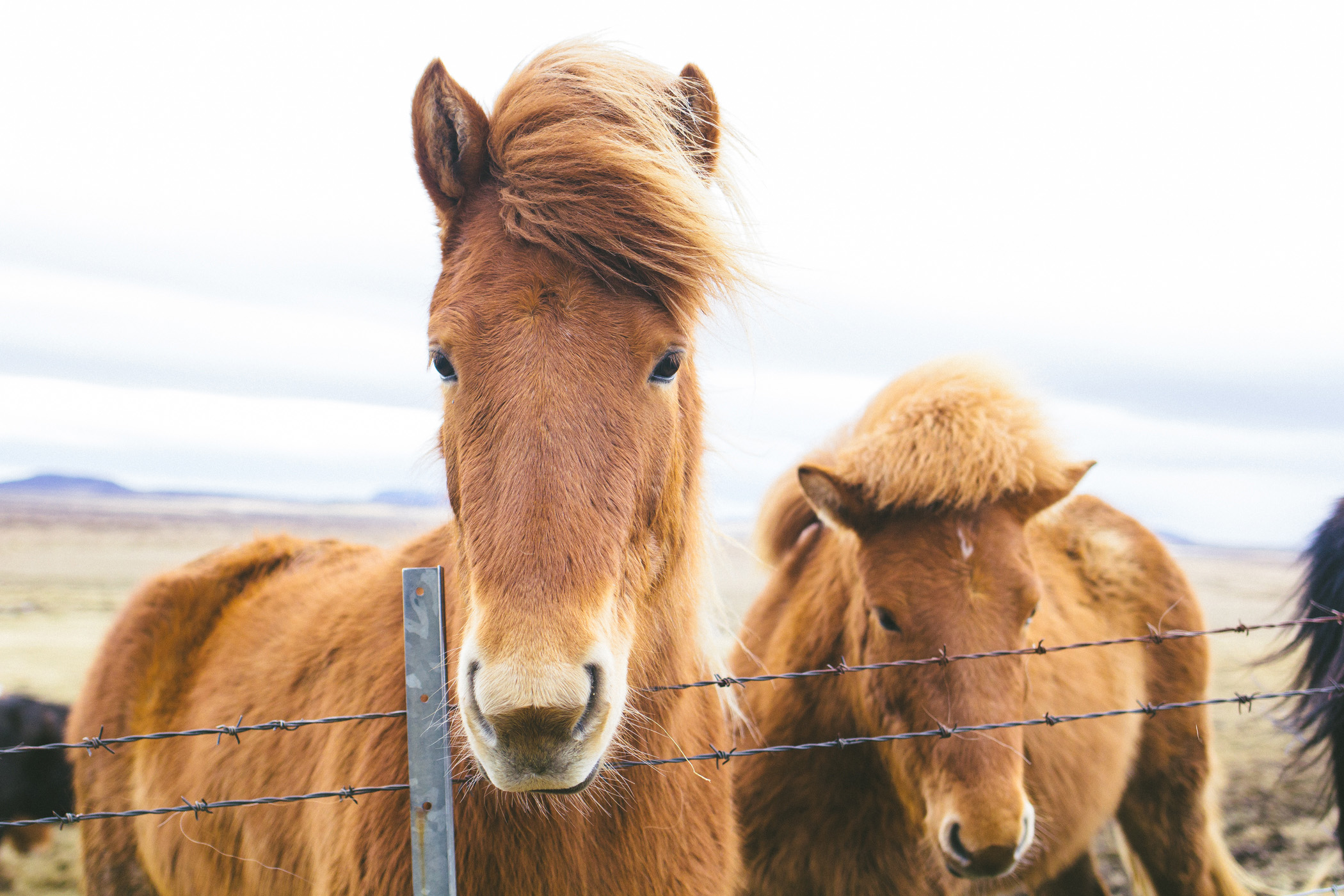 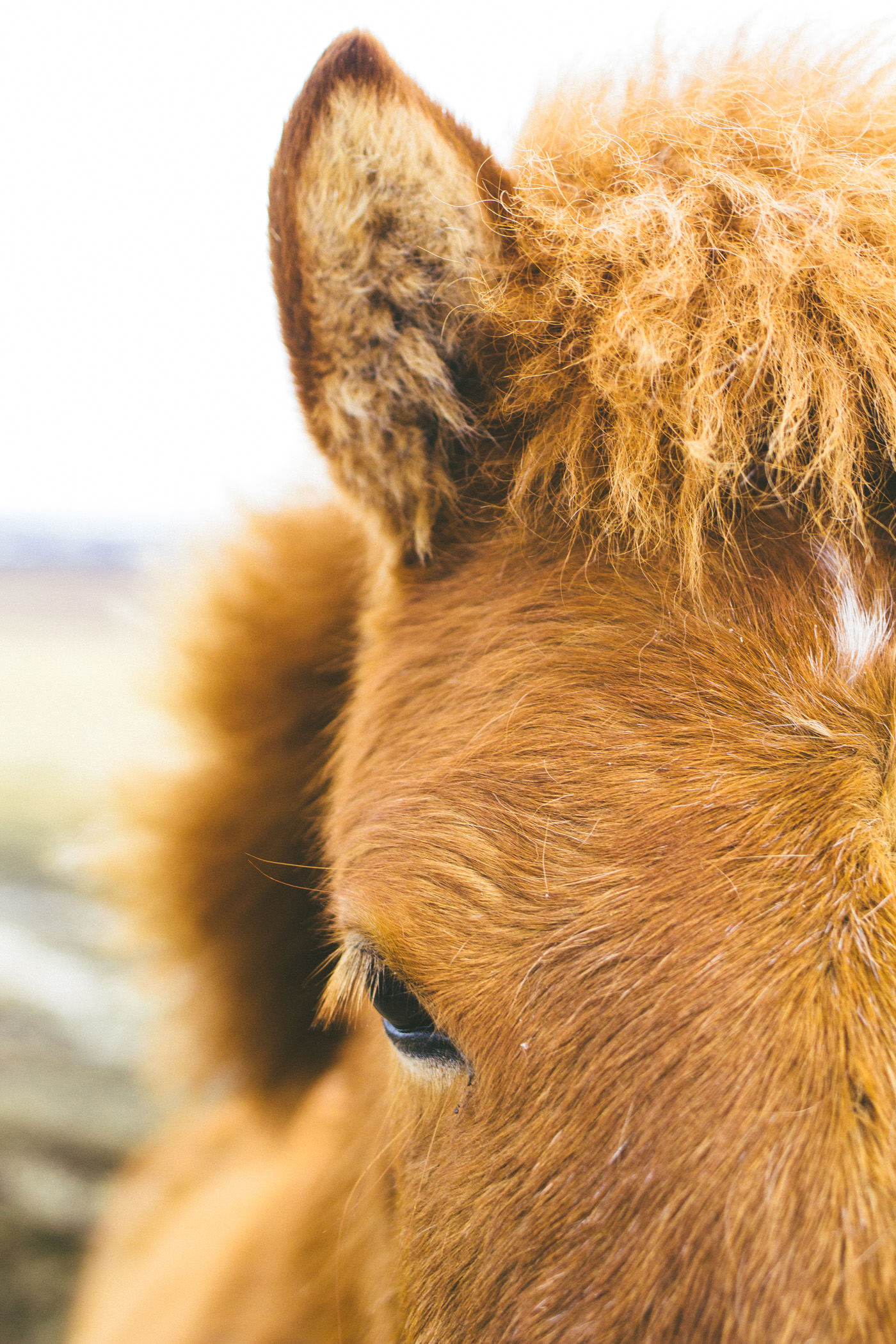 Icelandic Ponies: On our way around the Golden Circle, we stopped off on the side of the road next to a field of Icelandic Ponies–which, you guys, to be totally honest, was probably one of the biggest highlights of my trip. (Take this with a grain of salt, coming from a horse crazy girl who spent her entire childhood and adolescence riding horses.)

The ponies are unbelievably friendly. (Note: When you go there, the locals get offended if you call them ponies. They will be sure to correct you, saying they’re “horses.”) Regardless of what you call them, these tiny horses are possibly the sweetest creatures you’ve ever met. They’re insanely furry, with the thickest, chunkiest manes. They look like cartoon characters. 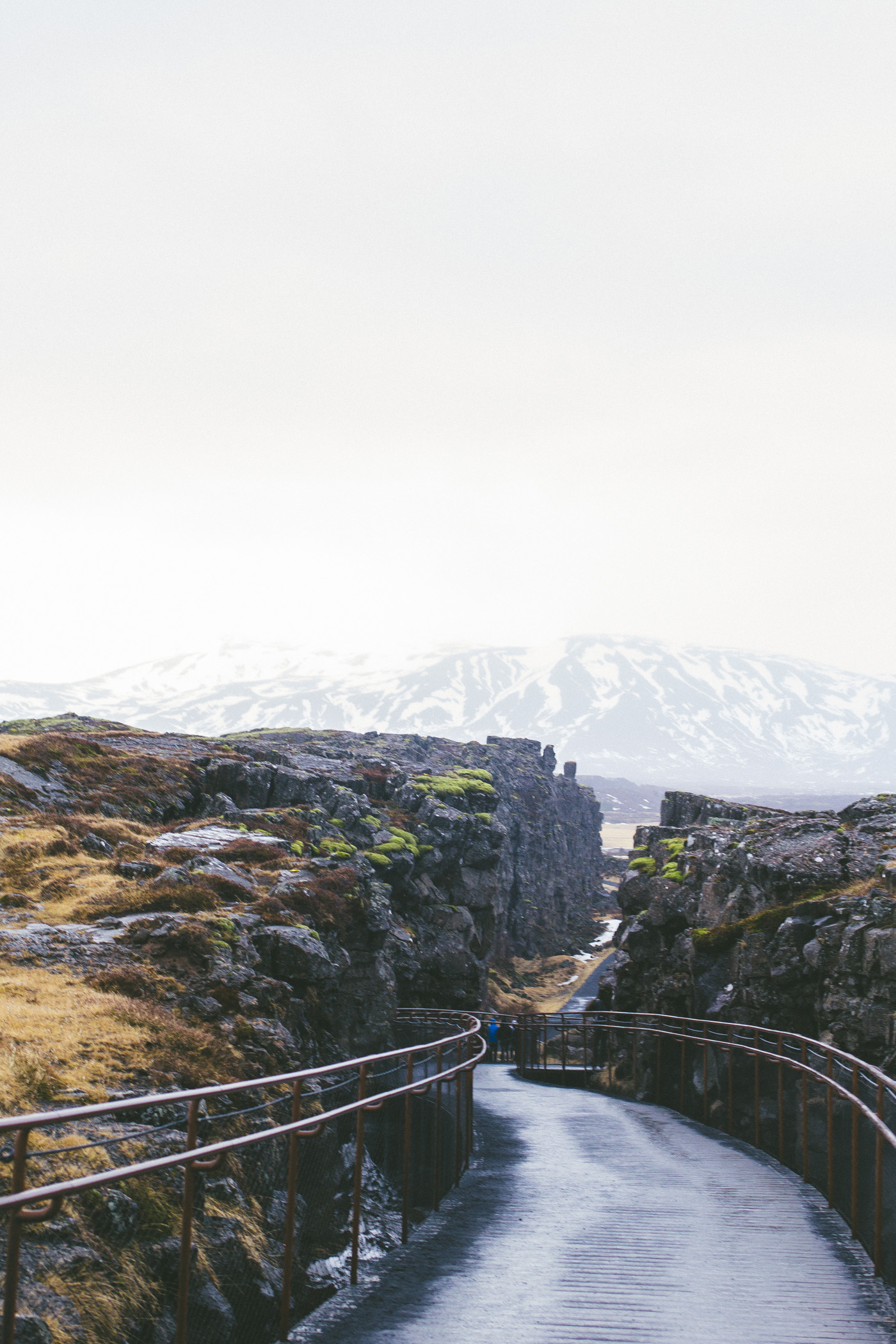 Thingvellir: After gushing over the ponies for about 15 minutes, we got back into the Jeep and ended our journey at Thingvellier, the only above water portion of the Mid-Atlantic Ridge, and where the North American and European tectonic plates meet! From the lookout, you can get a beautiful view of the lake.

Blue Lagoon: Honestly, it’s really hard to choose favorites, as everything we saw in Iceland was absolutely spectacular and unlike anything I’d ever seen before. BUT–if I have to pick favorites, I think Blue Lagoon tops my list.

Imagine a really chic public pool combined with a spa. That’s what Blue Lagoon is–except the pools are actually opaque, blue-green, geothermal hot springs. There’s a swim up bar, and a swim-up “mask” station, where you’re given two different masks derived from the lagoon, which are said to have special heeling powers! I wrote a whole post on Blue Lagoon here, so make sure to check it out before you go! I purchased the mask set as a souvenir and I love them. (Much more practical than an Icelandic sweater.) 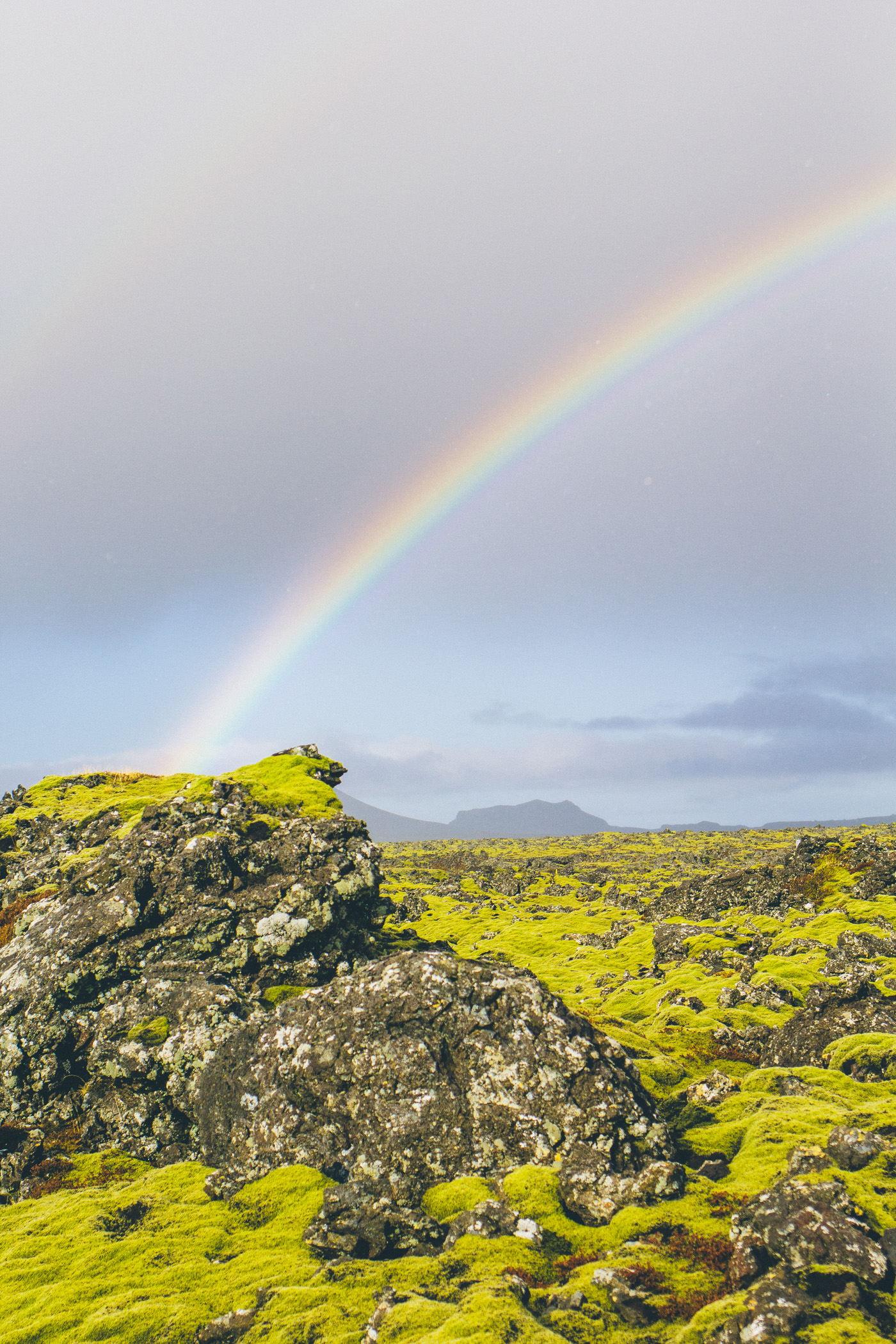 While it was a quick few days, it was amazing how many incredible things we were able to do in just a short time! Neal was super jealous, as Iceland is at the top of his bucket list, so we’ll be returning very soon! Thank you again to IcelandAir for such an unforgettable trip!

Have you been to Iceland yet? If not, is it also on your bucket list?

« What are your favorite reads?