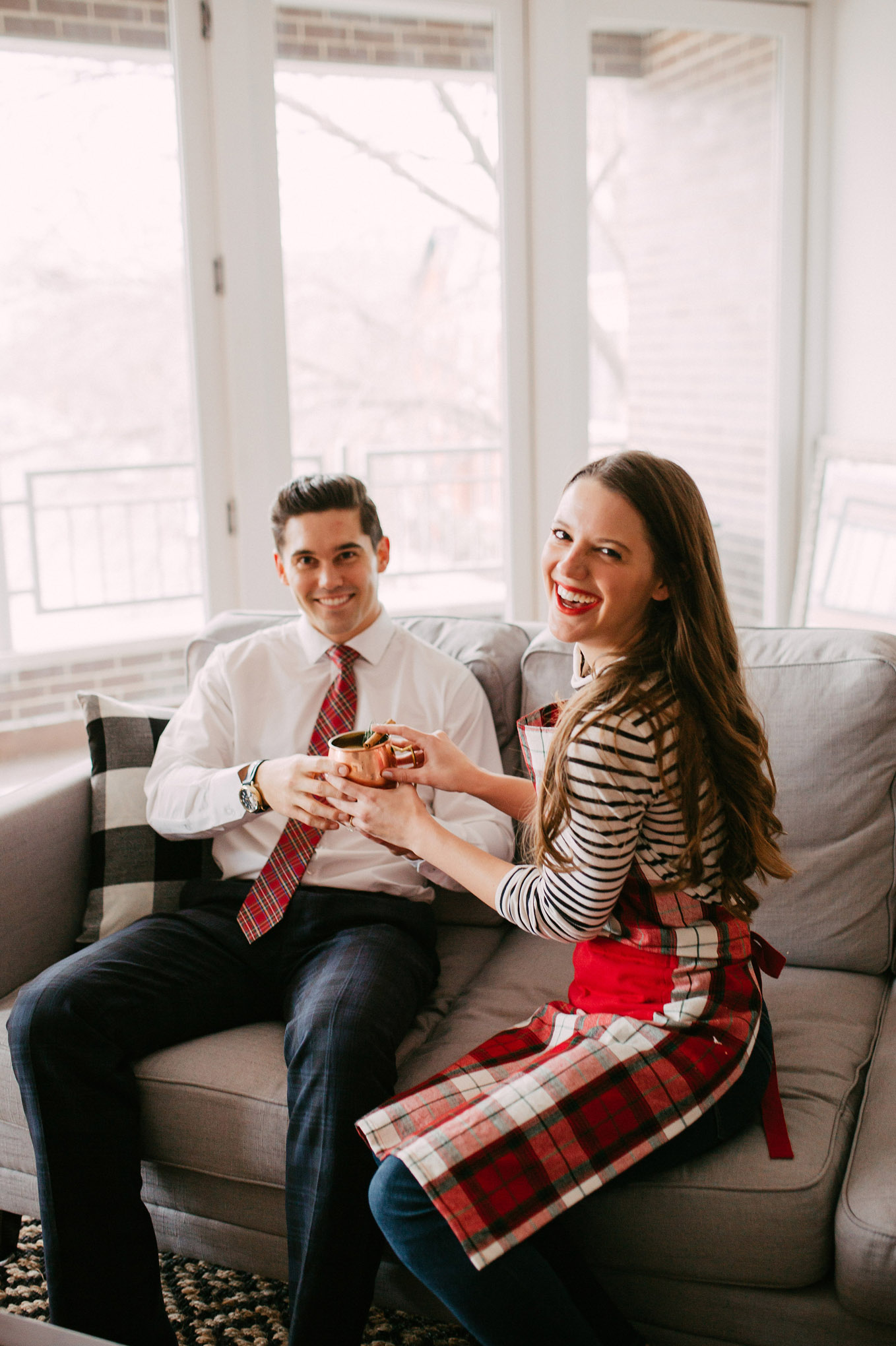 You guys know my favorite thing to do is ask you all for advice on what to write about.

Well, one request that kept coming up over and over (which we are so flattered by!) is that you want to see more “Neal and Jess” on the blog. Specifically, we’ve received quite a few questions on the topic of co-habitation and moving in together.

I will tell you this wasn’t as hard as I thought it was going to be. (However, take that with a grain of salt, because I am the difficult one.) It turns out, the things you argue over the most aren’t always what you would expect (and actually turn out to make for pretty hilarious blog post content!)

Together (but separately!) we compiled and commented on the 7 biggest “hot buttons” we have when it comes to co-habitation.

(Do you argue over any of these with your spouse?)

Neal: Should they dry dishes or should they look cute? The eternal question…

Jess: The dark horse on the list–I bet you never thought dish towels were such a a dangerous topic of contention, did you? I will explain.

You see, some people who live in my house are very concerned with cute, pretty, stylish dish towels. There are the towels made for hanging–and only hanging–on the oven handle. Pretty dish towels in the kitchen serve as a distraction from the horrible travertine backsplash that said person wants to rip out immediately, but cannot.

This cycle will continue for the rest of your life, that is, until you get engaged, and some angel will purchase you pretty dish towels that actually dry dishes from Williams Sonoma.

Pressing “clear” on the microwave

Neal: Why is this even a debate??? When you are running late for work NOBODY looks at the clock and says “GREAT! It’s SEVENTEEN SECONDS O CLOCK!!”

Jess: Until I moved in with Neal, it was never brought to my attention that this was a bad habit that drove people crazy. Not by my mother, not by my roommates, nobody. The fact that I possessed such a “horrible” habit for my entire life unbeknownst to myself was a bit astonishing to discover.

I don’t like to hear the high-pitched beeping sound when the microwave goes off. I am also always starving and sometimes I just can’t stand to wait the extra two seconds to pull the microwave open. These two factors contribute to a microwave that almost always says “seventeen seconds o’clock.”

Why would I need the microwave to tell the time? That’s what an iPhone is for!?

Where the shoes go

Neal: This was our first legitimate item of debate on this list.  Depending on your living space there, are a lot of good places where your shoes can go. In the middle of your floor, under your kitchen table, or anywhere else where they will trip your boyfriend are not acceptable answers.

Jess: Okay, we’re still not sure where the shoes live. We have, however, by process of elimination, discovered where they do not live. For one, the living room. My shoes tend to congregate in the living room like some type of lavish footwear buffet. Unfortunately this is displeasing to the other person who lives in my house.

Other places where they don’t live?


Well, the other person who lives in my house thought that all of his dress shoes could live underneath our dresser. The under-dresser dress-shoe buffet just happened to be in the perfect line of sight, so that when one sits up in bed in the morning, the first thing they see is a bunch of shoes crammed underneath a beautiful vintage dresser. This was also vetoed and now all of our shoes are banished to the “shoe cubbies” in the back hallway–AKA messy shoe hell that gives us both anxiety but is mostly out of sight out of mind since we only walk by it a few times each week. Two pairs of dress shoes also live underneath the bench in our room, but as they say–you learn to pick your battles.

Neal: Have a system, stick to it, and make this a true 50/50 effort. Laundry sucks whether you are single or living together and everyone agrees on that. Here’s a chance to actually better one another!!

Jess: (Wow. He left so much out. He must be feeling sweet today.)

When you move in with someone, you’ll probably discover that they have different laundry habits than you. The umbrella of “laundry” actually includes several points of contention that ladder up underneath it.

First, we can examine the way one approaches one’s laundry: Person A likely does several loads of laundry per week. Person B does laundry only when she runs out of clean underwear. (Like, why else would you do the laundry? Hello, I have a life?) The drastic differences in these habits can cause some ruckus from time to time.

Second, we can examine the containers in which the laundry is stored. This might come as a surprise, but your significant other is likely to develop some type of major distain toward your laundry basket for one of the following reasons:

Scenario A: You still use the dirty old plastic eyesore of a laundry basket that your mother likely bought you to use in the frat house.

Scenario B: While it’s nice to look at, it’s simply too large and not only enables, but encourages your habit of stockpiling laundry until you run out of underwear.

Jess: Something else you might not be cognizant of until you move in together: coming to terms with the fact that, on a scale of 1-10, your routine of hitting the snooze button 350 times is likely an 11 on the annoying scale.

When you set your alarm to go off 45 minutes early to allow you to press the snooze button every 8 minutes, this becomes frowned upon.

The bathroom and closet lights

Jess: There is a very high probability that one of you is going to be the person who always leaves the bathroom and closet lights on. And if you’re sitting there wondering, “I wonder which one of us that will be?”

Kitchen lights? Hallway lights? Bedroom lights? No problem, you turn all of those off on auto pilot.

But the closet and bathroom lights? Never. The only time you will remember to turn them off is when your partner is sitting on the bed, giving you that look while you walk out of the bathroom, like they’re just waiting for you to walk into a giant bear trap. Then, and only then, will you remember.

Neal: TURN LIGHTS OFF WHEN YOU ARE NOT IN A ROOM! HOW IS THIS DIFFICULT?? DO YOU PAY THE LIGHT BILL??  I sound like my father. [Editor’s note: Actually I am the one who pays the light bill! I suppose I can rack it up however I choose, then? I know, I know. #PickYourBattles.]

Jess: I’m going to start out by telling you about my grandma attire. Long pajamas, slippers, and a fuzzy teal bathrobe I’ve had since high school, are all uniforms in my house. They are also the bane of my fiancé’s existence.

Here’s the thing: He does this to himself. His ideal thermostat setting is 68 degrees. Sometimes I swear he logs into the nest app when I’m home alone and turns it down to what feels like a few degrees above zero just to mess with me.

Neal: 72 degrees is not a temperature any normal human with air conditioning lives in.  Kelly Larkin, bad influence, I’m also speaking to you–74 degrees is cruel and unusual punishment.

70 degrees is a good starting point for negotiations.  The “sneak and change the thermostat game” gets old after about a year…well who am I kidding no it doesn’t.

I’m not married yet but I feel like the temperature game is a pretty solid gauge for what it’s like to be married.

(Wow I hate puns but BOOM.)

Have you argued over any of these, too!? What are your biggest “hot buttons” when it comes to living together?