3 Pieces of Advice to my 22 Year Old Self 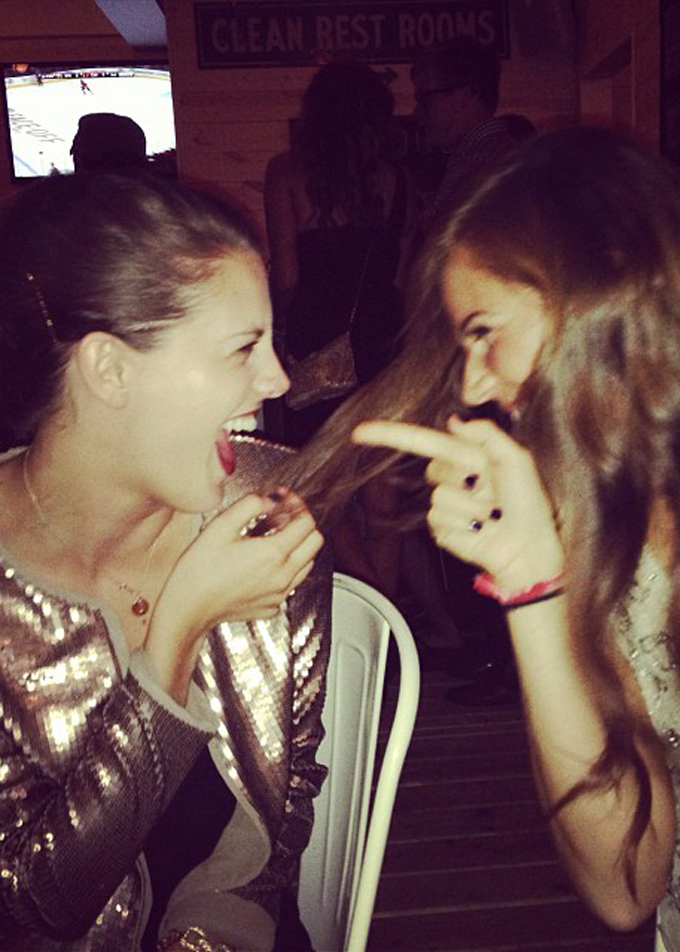 Me and my best friend, Michal. Age 23. (Approximately.) I owned a lot of sequins back then, but other than that, nothing has changed. We still pose for pictures like this.

Fun fact: I first started reading one of my favorite websites (which I later ended up working for), The Everygirl when I was 22 years old.

I was right out of college, I had no idea what the next chapter held for me. I loved the real world, but I was also turned upside down with the stress of work, scraping pennies to try and have enough to meet friends for happy hour but still be able to pay my rent. I didn’t know what the next year was going to look like, let alone the next five years.

I used to get lost for hours reading all sorts of interviews on the site. Career profiles, apartment tours–creative people who lived far cooler lives than me, who had much better taste in interior decor–(why weren’t they living with all their parents hand-me-down furniture, too!?)

Most of all though, I loved the “What advice would you give to your 22 year old self?” question that was asked in every interview.

It was strange to me, because I couldn’t ever imagine being on the other side. The thought of me eventually being old enough to pass along advice to a 22 year old seemed laughable.

The other day I was reading through my Ask Jess question submissions (you can submit one of your own right here, by the way!) and there it was:

“I graduated college last May and have been working in advertising, in Chicago for the past 10 months. At 22, things seem kind of blurry and confusing, if you could go back and give your 22/23 year old self any advice, what would it be?”

It’s funny, because before this question, I don’t think I’ve ever had a moment where I’ve stopped and thought “wow, if only I knew THIS at 22 years old!”

But now that I think about it, there are some pretty impactful things I’ve learned in the years where I somehow grew from the 22 year old girl who was stressed, hated her job, broke, and often tipsy, into the nearly 29 year old girl I am now–who loves her job, is less stressed, financially stable [and sometimes still tipsy because, wine].

Frankly, this is advice that anyone from any age can deal with–writing this was a great reminder to myself even, so no matter what your age or situation, I hope you can benefit from this in one way or another! 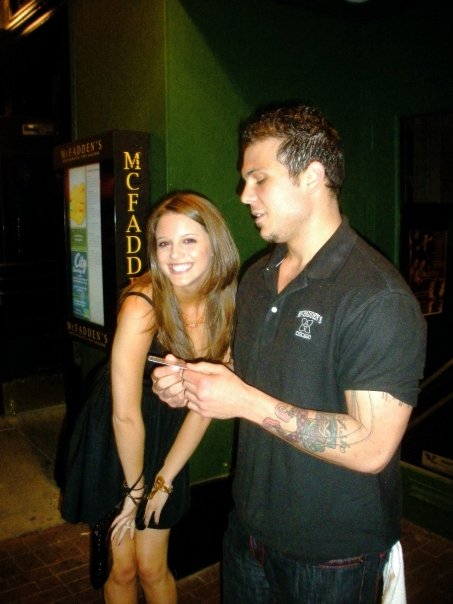 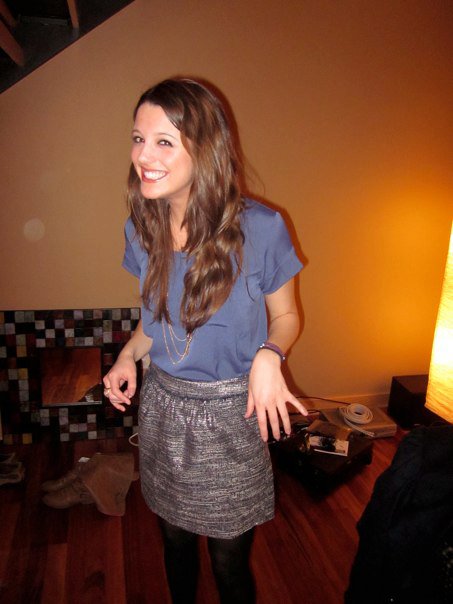 Left: Getting carded on my 21st birthday || Right: Being a weirdo “pregaming” in Milwaukee, 23

As far as I’m concerned, there are two kinds of people in this world: People who make changes when their life isn’t going the way they want, and the people who sit around and complain.

(Which one are you?)

You are in control of your own happiness. If you aren’t happy–figure out what you’d like to be different, and make a plan for how to get there.

On the other hand, sometimes it’s hard to put your finger on WHAT exactly you even need to change. I found that talking through things out loud to a friend (or your mother) typically helps bring some clarity.

For example, at 22, I realized that I needed to end the relationship I was currently in when I told my mother over the phone, “I just feel like I’m missing out because all my friends have so much fun going on dates.” UM…HELLO? ;-P

I found through quite a bit of experience that figuring out what you don’t want helps you find out what you do want! So if you find yourself in this spot–just change something. You’ll either like it, or you won’t, and then you can check that off the list. That will get you so much further than doing nothing at all. 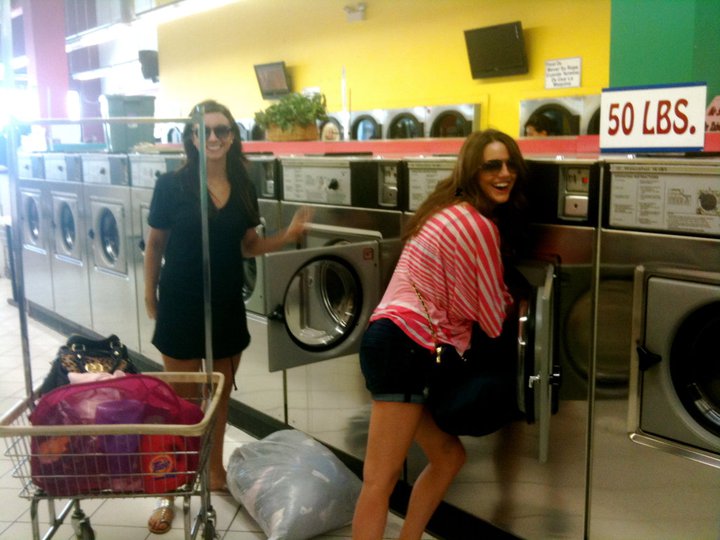 Age 24: A roommate trip to the laundromat because our washing machine was evil and we were too poor for laundry service. Fact: I remember flirting through Neal via text message while in the car driving home.

This is the time for taking risks

This is one of my favorite quotes of all time:

The quality of your life is in direct proportion to the amount of uncertainty you can comfortably deal with.–Tony Robbins.

Your early twenties are a time to take calculated risks in your career. You don’t have children, you don’t have a mortgage. You don’t have anyone counting on you other than yourself. Risk is something you lose when you’re in your thirties and forties, simply because you have more responsibilities.

If there were ever a time to take a leap of faith–this is it.

I know for a fact that had I not taken calculated risks (and even some stupid ones) in my career, I would still be miserable in a corporate job that gave me absolutely no joy in life.

Nobody else actually told me that quitting my full time job to fly by the seat of my pants was a good idea, probably because nobody thought it was a good idea. (They likely thought I was delusional!)

But I knew a few things: I was unhappy in my career, I had enough money saved to make it through several months of (*worst case scenario*) no income, that I had lot’s of ideas on how I could make money, and that there would always be another “dime a dozen” office job waiting for me if I failed. Why not jump? I was 75% confident that a net would appear, and it did.

Of course, by all means–make sure that you have everything you need to in place. Have a healthy savings account. Have a backup plan. But also, faith in yourself, and don’t let fear of the unknown hold you back. 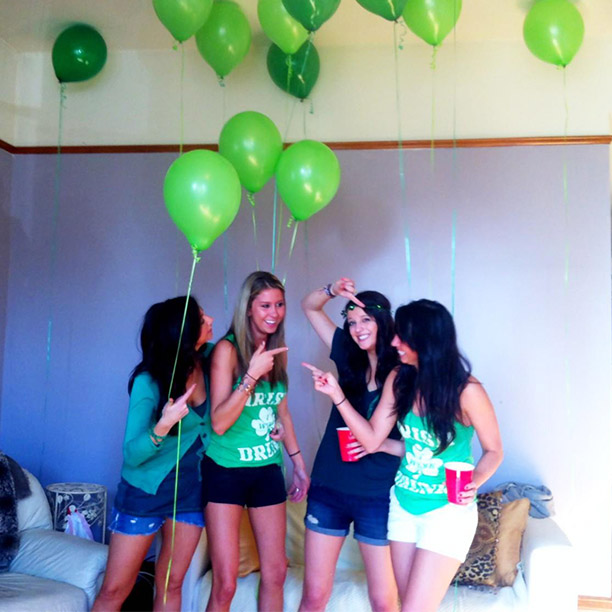 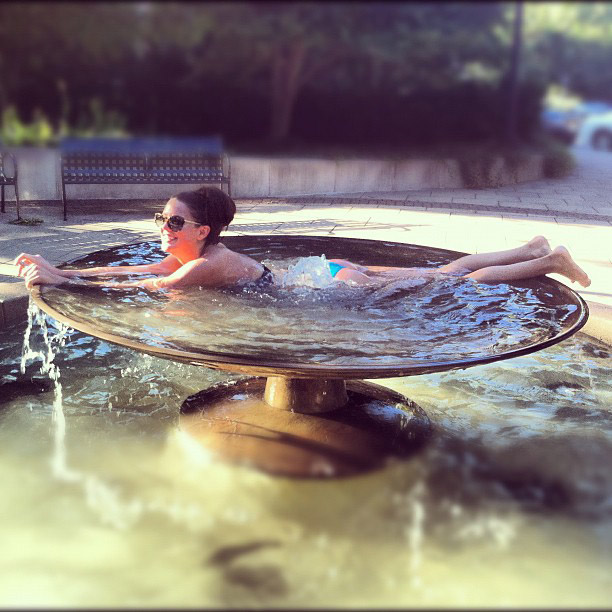 Left: Age 24: My roommates and I at our annual St. Patrick’s Day rager. We accidentally painted the wall purple, but only to the moulding because we didn’t actually own a ladder. || Right: Age 23: That time I took a dare and swam in a dog fountain for $50, because that was a LOT of money.

Stop trying to plan 10 steps ahead, because you likely won’t even get to step 5 before life changes course.

Here’s the thing: the chances of you staying at your first, second, or third job out of college are slim to none. Know that going in.

When I worked in advertising, I was constantly pushing myself to get promoted so I could have a job like my boss or my bosses boss one day. I wanted to do well, my mentors believed in me and gave me opportunities to shine. And I was good at it! Why shouldn’t I be striving to move up in a career I was good at? I spent a lot of time asking a lot of “what ifs?” and envisioning my role in X situation vs. X situation. Should I move to New York? Could I ever get a job at Google? Should I be learning to code?

In your early twenties, you spend SO much time obsessing over what your career is going to look like, that you fail to realize that the “big picture” you’re seeking doesn’t actually exist.

So live in the moment, do what you can with what you have, and stop trying to plan your life 10 steps out. It’s not going to go how you envisioned no matter what. Chances are, your path will change course before you even get halfway through that “plan” you wasted so much time formulating in your head.

Instead of worrying, live in the moment! Take it a day at a time! 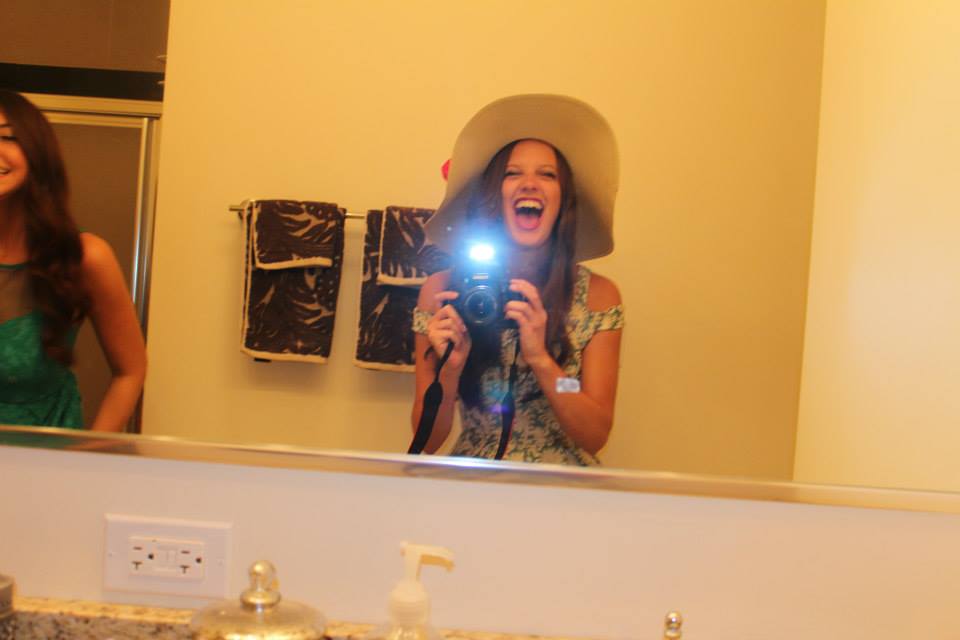 Who knows what’s actually going on here, but based on the attire I know this is from our roommate Kate’s “Derby” themed birthday party. (Which was so successful, it was then repeated the following year.)

What’s one of the most valuable lessons you’ve learned thus far?